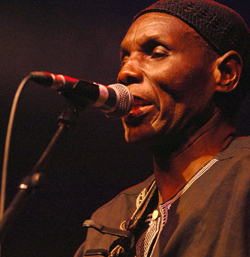 MUSIC legend Oliver “Tuku” Mtukudzi is in line to join a select group of singers who have had the chance to witness tribute concerts held in their honour at the end of the month.
Music promoter Josh Hozheri, Tuku’s manager Sam Mataure and Pakare Paye Arts Centre director Watson Chidzomba have teamed up to organise a celebratory bash for Tuku on September 27, which is expected  to feature several top African musicians.
Hozheri confirmed the Harare International Conference Centre (HICC) gig.
“The mega concert is meant to celebrate Mtukudzi while he is still alive,” said Hozheri.
“It has been on the cards for some time now and I am happy that it will finally take place.”
A promotional video on the tribute concert has already been made.
Mataure and Tuku, who are currently on a tour of the US and Canada, confirmed the show in the promotional piece.
Mataure, a veteran drummer, who has also played for another Zimbabwe music legend Thomas Mapfumo, reveals that musicians from more than five African countries are expected to grace the event.
“The event is the first of its kind and we are expecting a number of African artistes. We are expecting artistes from Kenya, Tanzania, Angola, South Africa and Mozambique among other countries,” he said.
According to Mataure, several top Zimbabwean musicians will perform at the show that will pay homage to the 61-year-old internationally acclaimed music icon.
“Some of the local artistes expected to feature in this event include Ammara Brown, Alexio Kawara, Tariro Negitare, Baba Shupi and Munyaradzi Mataruse among others,” he said.
A short promotional video, Tuku gives appreciates the rare honour to be bestowed on him.
“I feel so happy about the tribute concert and I am looking forward to it,” said the music superstar.
“No one has ever done this before, like I always say, people are recognised when they are gone but in my case someone has decided to honour me while I am still alive,” said Tuku.
“It is so nice to be appreciated and acknowledged while I am still alive,” said Mtukudzi who has over 60 albums under his name.
Last year, in September, Tuku celebrated his 60th birthday in a concert that was attended by over 10,000 ecstatic fans.
Tuku’s birthday bash featured several stars from the region.Advertisement