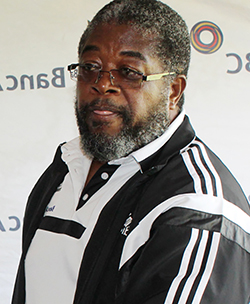 DYNAMOS president Keni Mubaiwa will fight it out with Highlanders boss and acting PSL chair Peter Dube on Saturday for the right to replace Twine Phiri whose mandate was revoked by councillors last year.
Mubaiwa said Tuesday that he was confident of winning the Saturday election.
He said he had achieved a lot as Dynamos president after winning four league titles, adding it was now his time to lead the top flight league.
“I think I am now ready to lead the PSL,” said Mubaiwa.
“Last time I lost to Twine Phiri but now I have done my homework and am confident of winning. I have achieved a lot at Dynamos since I came into office in 2011.
“That has strengthened my CV. I won four championships and hope to transform the PSL if elected.”
ZIFA have ordered fresh elections for the PSL after the association’s president Philip Chiyangwa declared that Phiri was no longer the chairman of the topflight league.
Phiri’s mandate, according to Chiyangwa, was revoked by the councillors on October 3 last year when other members of the then Cuthbert Dube-led board were also swept away.
In the last election, Phiri beat Mubaiwa by 13 votes against two to win a second term in office.Advertisement