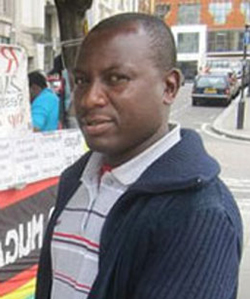 FORMER Dynamos captain Memory Mucherahowa has accused club legend George Shaya of ill-treating players when he was chairman as the club defied odds to reach the final of the African Champions League in 1998.
Shaya – a record five-time Footballer of the Year – is suffering from memory loss, a problem usually associated with advanced age. He is at his Glen Norah home in the capital.
But Mucherahowa, who was part of the squad that reached the Champions league final for the first time sounds emotional in his criticism of the man who is regarded as arguably the best ever footballer to emerge from Zimbabwe.
The former captain even argues that Shaya is not Dynamos’ best footballer ever and suggest Moses Chunga instead.
Mucherahowa, who now lives in UK, accuses Shaya of fining players $5,000 each for allegedly demanding their dues after the club’s participation in the lucrative Champions League.
“It’s sad to read about Shaya’s terrible plight in the newspapers,” said Mucherahowa in remarks made on social media.
“The five times footballer of the year and one regarded by many as the best Dynamos player ever – although I think Moses Chunga is the best, is unwell and it makes me feel so sad.
“Yes he needs help, we all need help. But remember, some of us would not have needed help as we tried our best to avoid that path.
“Do you still remember Mr Shaya that we earned US$1,6m from the Champions League? And YES you were the Chairman. US$1,6 million if you can still remember; if not ask Llyod Hove.
“We fought the battle through thick and thin just to try and make our lives better after football.
“We could have bought houses for ourselves then but guess what, as the Chairman you decided to share the money with some other people who were not even known to the club.  I doubt if those people ever attended any of our matches.
“You decided to give us soup whilst you and your gang ate all the meat. You gave us Peanuts Mr Chairman and, on top of that, you fabricated a false story and suspended us. Out of that little money which you gave us, you decided to fine us $5 000 each.”
He added: “You are lucky that you will get help whilst you are coming from your house in Glen-Norah. What about some of us?
“After that US$1,6 million we earned from the Champions League will be coming from Mhondoro rural area because we couldn’t afford to buy a house in the city as you had promised.Advertisement

“The battle is still fresh in our minds and the scars are still visible but we have nothing to show for it.
“I pray that you get the help you need soon because (former coach Callisto) Pasuwa is also waiting for his $26,000 and, unfortunately, he is one of those (you fined) $5,000. We can forgive but not forget Mr Chairman, Sir.
“Anyway, I Wish You All The Best And A Very Quick Recovery My Chairman.”