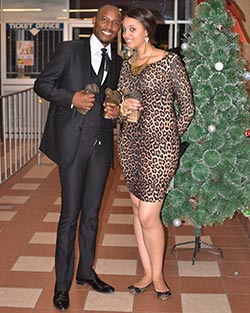 CHRISTIAN rapper, Mudiwa Hood, was one of the biggest winners of this year’s annual Hip Hop Awards, walking away with three gongs.
Edging the likes of Maskiri, Tehn Diamond and Junior Brown, Mudiwa won the best video, best gospel artist and people’s choice awards at last week’s ceremony.
The star wowed the crowd with a super performance of his popular sing along ‘Ndaita Mari’ on the night.
In his acceptance speech, Mudiwa thanked “God for everything” and his fiancé Karen King for her support.
The event however, attracted criticism for poor organisation. The panel of judges pulled out on the morning of the ceremony while presenter Vimbai Mutinhiri failed to turn-up in addition to a host of technical glitches.
Said deputy information minister Supa Mandiwanzira who was the top guest: “There are standards that are required in terms of putting together a show and they are well known.
“There is a difference between a show in Zimbabwe and where you have Nigerian artistes like D’Banj or P-Square. The approach taken in arranging a local show is very different to when international artistes are coming to Zimbabwe.
“We need to see an end to that, we want to go to a show that has an all Zimbabwean line-up but whose arrangement is the same as it is when D’Banj is coming or any other international artiste.
“If we can get to that level I think our music would have matured. The musical effort was good but the organisation was not good enough.
“Most of these things do require a lot of money to be able to pull off a fashion that is totally world class, we recognise the efforts that the young people put but, of course, more needs to be done to make it world class so that even if it is converted to television it will be good content.”
Equally unimpressed were the sponsors, Carex Condoms who said they would not back the event next year.
“As sponsors we were expecting something better than what we saw, especially considering the amount of money we had put in,” said a company representative.
“We don’t expect unprofessional things such as judges pulling out because things were not well organised and a host of other problems we witnessed during the night of the awards.
“It is obvious that we will not be a part of this mess next time because we have realised that it is a waste of money, even the turnout was not what we expected.Advertisement

“The whole thing lacked an element of seriousness, compared to the Big Chill, which is well organised and the numbers keep increasing. We can keep putting more money on that.”
Mudiwa Hood ft.Craig Bone – Anhu Acho Tisu