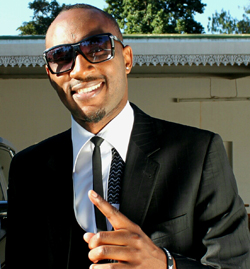 ‘10 over 10’ – produced by Cyril Tsiga – is a catchy dance tune which perpetuates Mudiwa’s undefined pseudo-gospel genre.
Tsiga, aka Kindahquet (pronounced Kindacute), also lays vocals on the track which has a heavy influence of Nigeria where he recently returned after spending four years in West Africa.
To mark the release of ‘10 over 10’, Mudiwa also released a video for the track which does no harm to his growing reputation as one of the leading lights in Zimbabwean urban music.
The video, produced by Blessing Mugove Gatsi, was shot at Phillip Chiyangwa’s imposing Borrowdale house.
Mudiwa told New Zimbabwe.com: “10 over 10 is about how God can lift and change a nobody to becoming a star or a significant figure in society. If you know you’re with Jesus Christ, you shine.
“I’m living testimony of that, and I’m simply saying my God is good on a score of 10 over 10.”
Mudiwa performed the new track last Sunday at Prophet Uebert Angel’s Spirit Embassy Church in Harare, where the preacher was celebrating his 35th birthday. The singer is a member of the church.
Mudiwa Hood Ft. KindahQuet : 10 over 10