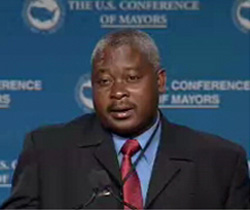 “ACTING MDC-T president” Elias Mudzuri was Monday forced to abort a press briefing after it emerged youths aligned to his rival Nelson Chamisa had prepared to unleash violence at the party Harvest House headquarters in Harare.
Mudzuri and Chamisa are involved in a brutal power scrap as party leader Morgan Tsvangirai battles colon cancer in South Africa.
In the statement he issued after the stillborn bid to hold a press conference, Mudzuri said Tsvangirai had appointed him to act as party leader according to the party’s constitution and in public view.
“Now fast track to the so-called current impasse and you will realise how glaringly unusual one can claim the same position via a dubious tweeter announcement.
“Those are unofficial channels of communication which we have since confirmed to be fraudulent and patently unknown to MDC-T channels of communication,” Mudzuri who claims to have met Tsvangirai a few days ago said.
“It’s a stinking conspiracy! Such behaviour constitutes a serious offence and an intolerable breach of trust in terms of our party constitution. It’s criminal to impersonate and mock our President given the situation he is dealing with. That must stop immediately.”
Tsvangirai e spokesperson Luke Tamborinyoka last week announced the MDC-T leader had made changes to the leadership picking Chamisa to take charge of the party after Mudzuri left for a political parties’ workshop in Cape Town.
Twitter row
The MDC-T leader’s social media accounts have remained active despite reports his health had deteriorated prompting Mudzuri to reveal Tsvangirai has not had access to his phones for a while now.
“For the record, President Morgan Tsvangirai has not tweeted for months because he hasn’t been well neither does he have access to any of his communication gadgets at the moment.
“This is abuse of the highest order,” said Mudzuri adding “fake accounts had been created” to facilitate a power grab.
Tamborinyoka, who is the party director of information, has also clashed with MDC-T propaganda chief Obert Gutu over how to handle the media.
Gutu refused to be drawn on the latest developments. “I am sorry, I am not commenting on these issues,” he said.
Meanwhile, Mudzuri said the MDC-T has descended into a vortex of lies, deceit and misinformation accusing ruling Zanu PF moles of seeking to destroy the party.Advertisement

Disjointed party
“We note with grave concern the escalation of divisive, hateful, intolerant, and egocentric behaviour that is causing major disservice to the party by narrowing the prospects of endearing ourselves to the electorate.
“Such behaviour portrays us as a disjointed and self-defeating party. This is the work of detractors bend on destroying the party from within, the same exact situation that we saw in Zanu PF where people were running parallel structures and programmes in defiance of party protocol and procedures.”
The former Harare mayor said he would work hard as per the mandate given to him by Tsvangirai to unite the party and prepare for a successful general election.
“I want to assure the MDC-T family that we will contest the election as a united front, a solid party with credible coalition partners.
“We also called upon our Alliance partners to desist from interfering with MDC-T party business as this is ultra vires the spirit of the Alliance agreement.”
While MDC leader Welshman Ncube has claimed that Tsvangirai told him Chamisa was his choice of successor, Mudzuri argues the former Industry minister had not met the ailing former prime minister.
He added that Tsvangirai would remain opposition presidential candidate until such time he declares otherwise. While his rival seems bent on “taking power through manipulation”, Mudzuri seemed to indicate that only a congress would declare Tsvangirai’s successor.
“Should the president ever decide to announce his retirement, the party will still be guided by its constitution to find the next leader of both the party and the alliance.
“There are no shortcuts, and no one can declare himself/herself part president without following procedures,” he said.