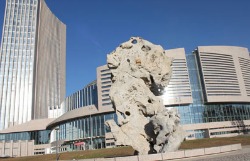 ON THE EVE of his 91st birthday, Robert Mugabe has been selected to head the African Union, the 54-nation organization designed to promote unity, economic cooperation, and social development across the world’s poorest continent.
Zimbabwe’s autocratic president is a dreadful role model. His party has been charged with intimidation, vote-rigging, or other forms of fraud in every election since it first won in 1980. He never intended to share power, as he indicated when I interviewed him the day after that vote.
“As you saw from the decision of the people, it is virtually only one party, the Patriotic Front, that is in power. The rest of the parties have been rejected so we have a one-party state already,” Mr. Mugabe, still the revolutionary, told me then.
“If we had just one party by decision of the people that to me would be preferable.”
In fact, his party didn’t sweep the vote. It won 57 of 100 seats. But, in that spirit, Mr. Mugabe’s rule has been ruthless and often bloody through seven terms since then. Shortly after taking power, his party was associated with a campaign of ethnic cleansing of tribal and political rivals in Matabeleland that killed as many as 20,000 people.
The tragedy is not just draconian politics. The Zimbabwe that Mr. Mugabe inherited had such promise: a well-run former British colony with the highest proportion of college graduates anywhere in Africa at independence.
Zimbabwe still has vast resources: mineral riches, verdant game parks, epic waterfalls and a tropical climate for tourism, and lush agricultural land that could have been a breadbasket for Africa.
Today, however, the country–slightly larger than Montana and slightly smaller than California–is on the verge of imploding.
“Zimbabwe is an insolvent and failing state, its politics zero sum, its institutions hollowing out, and its once vibrant economy moribund,” International Crisis Group reported last fall.
The stats are astounding. Per capita income is around $600 a year, according to the CIA Factbook. Unemployment in the formal economy is as high as 80%, while industrial production has fallen below 40% of the nation’s potential, the International Crisis Group noted. Many companies have shut their doors. Life expectancy has dropped to 54 years. Zimbabwe has one of the highest rates of HIV/AIDS, which accounted for more than half of all deaths in 2011.Advertisement

“Zimbabwe’s growing instability is exacerbated by dire economic decline, endemic governance failures, and tensions over ruling party succession,” the International Crisis Group concluded. “Without major political and economic reforms, the country could slide into being a failed state.”
The International Monetary Fund announced last year that it would not lend Zimbabwe more money for development because it was so far in arrears, dating to 1999. The World Bank takes a similar position.
Mr. Mugabe, who in 2006 likened the IMF to the devil, seems oblivious to economic realities. Three-quarters of tax revenues go to pay some 250,000 workers employed by the state, the IMF reported. Yet last year, Mr. Mugabe kept a campaign promise and raised salaries 14%. In 2000, he raised the salaries of his own office and his cabinet by 200%.
“The current situation is not sustainable,” saidComfort Ero, Africa program director of the International Crisis Group.
On top of all the other problems, Mr. Mugabe’s capabilities are “visibly waning,” the group reports. His succession has been muddied by indications that his second wife, Grace—often referred to as “Gucci Grace” because of her legendary shopping excursions—may be Mr. Mugabe’s favored political heir. She heads the ruling party’s women’s league.
But she and others may have to wait. Mr. Mugabe has indicated that he wants to run again—in 2018—after he turns 94.
Robin Wright is a joint fellow at the U.S. Institute of Peace and the Woodrow Wilson International Center for Scholars. She is on Twitter: @wrightr. This article is from the WSJ.