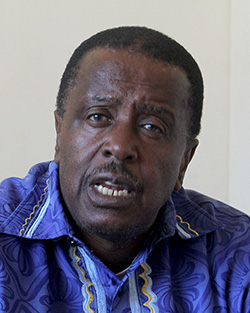 PRESIDENT President Robert Mugabe has appointed Robert Smart Goodson Nguni, allegedly a fugitive from the law in Eastern Cape, South Africa, as a commissioner on the Zimbabwe Anti-Corruption Commission.
Nguni, who was convicted of “offences of fraud and corruption” by the courts in Port Elizabeth South Africa, was employed as Regional Manager by the South African Post Office in the Eastern Cape. He ran away from South Africa in 1999 amid allegations of fraud levelled against him by his employer.
Nguni has also served in various capacities within Zanu PF including the post of Deputy Information and Publicity Secretary for Harare Province.
On the 1st of March 2008, the National Prosecution Authority of South Africa obtained an order in the High Court of South Africa (South Eastern Cape Local Division) authorising the curator bonis to dispose of Nguni’s property and disburse an amount of R62 806.60 to the State (Case number 2529/99) after the courts had established that Nguni had benefitted from his participation “in the offenses of fraud and corruption” which were perpetrated against his employer.
The selection of Nguni to be a commissioner, against the background of his conviction for the offences of fraud and corruption by the South African courts, raises suspicion that the appointments made to the Zimbabwe Anti-corruption Commission, which now is operating from the President’s Office, were politically motivated and no due diligence was done in the choice of candidates in line with the strict provisions of the Anti-Corruption Commission Act (Chapter 9:22).
The Act provides, among other reasons, that a person is disqualified from being appointed a commissioner if he/she “has been convicted—
(i)       in Zimbabwe, in respect of an offence involving dishonesty; or
(ii)      outside Zimbabwe, in respect of conduct which, if committed in Zimbabwe, would have constituted an offence involving dishonesty.”
It is common knowledge now that Nguni was convicted of the “offences of fraud and corruption” in South Africa which offences are legally punishable in Zimbabwe and how this escaped the interviewers’ panel chosen by Parliament Standing Rules and Orders Committee which did the interviews, or the President of the Republic who made the appointments boggles the mind.Advertisement

To make matters worse, President Mugabe appointed an individual who has a history of fighting those who have previously stood up against corruption including the anti-graft body itself.
It is legally recorded that on the 14th of May 2012, Goodson Robert Smart Nguni approached the High Court seeking to obtain an order declaring that the Zimbabwe Anti-Corruption Commission is not statutorily empowered to arrest persons accused of corruption.
This he did to try and prevent the imminent arrest of Zanu PF Members of Parliament who were targeted by the anti-graft body for abusing the constituency development fund issued by treasury to MPs for developmental projects in their constituencies.
Nguni, then, argued that the authority to arrest criminal suspects is vested solely in the police and that ZACC can only make recommendations to the police should they uncover evidence of corruption against a suspect.
This was despite the fact that section 13 of the ZACC Act clearly defines the powers of the Commission and that “the commission shall exercise its powers concurrently with those of the police.”
This section is very clear and simply interpreted, means that the Commission shall exercise its powers alongside or parallel to those powers being exercised by the police and therefore can arrest suspects without warrants as provided for under the Criminal Procedure and Evidence Act (Chapter 9:07).
It is clear that Nguni’s frivolous court application on 14 May 2012 was meant to defeat the course of justice and protect the interests of corrupt public officials through a deliberate move aimed at abusing the judiciary process to defang the ZACC and render it impotent in the fight against corruption.
To then imagine that such a character, three years later, is appointed to the same commission with a mandate to fight corruption is outright madness and a clear indication that both parliament and the office of the president are not serious in their so-called attempts to fight corruption.
We have been told ad nausea, that the Zanu PF government has signed mega deals with China, especially now after the Chinese President has visited the country, but we also know that several projects that have been lined up by government have been hamstrung by massive corruption and hope had been rife that if an anti-graft commission is established, corruption might be reduced but with dubious characters appointed to such a commission, corruption can only become worse.