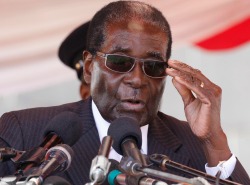 PRESIDENT Mugabe Friday officially commissioned the new look Victoria Falls International Airport, in what he termed a milestone in the ruling governments’ economic blue-print-Zim-Asset.
China Jiangsu carried out upgrading work which commenced in February 2013 and funded by China Exim Bank on a concessionary loan of $150 million.
Mugabe, who was supposed to arrive at the venue at 9.10AM, only arrived at 12 noon and immediately unveiled the plaque before touring the new international terminal.
In his address, Mugabe said the new look airport was a key enabler for development.
“This development indeed signifies exciting times ahead for our aviation and tourism sectors. The upgrading of the airport paves way for Victoria Falls Town to become a tourist hub for Zimbabwe, SADC and the rest of the continent,” he said in a brief speech.
The 92-year old initially forgot to announce that the airport was officially opened and returned to the podium to do so.
New developments at the airport which is now able to handle wide bodied aircraft such as Airbus A340, Boeing 777 and Boeing 787, include a 4km runway, international terminal building, fire station, control tower and installation of the state of the art specialist aviation equipment and the upgrading of the old airport into a domestic terminal building among others.
It now can accommodate 1,500 000 passengers per year, up from the previous 500 000
“After the completion of this project, visitors and tourists from Europe, Asia, the Middle-East can fly directly into Victoria Falls and experience one of the Seven Wonders of the World. There are well advanced plans for several airlines to fly directly to Victoria Falls,” said President Mugabe.
“I therefore urge the Ministry of Transport and Infrastructural Development and the Civil Aviation Authority of Zimbabwe and the Ministry of Tourism to work closely together to market the project for economic benefits.”Advertisement