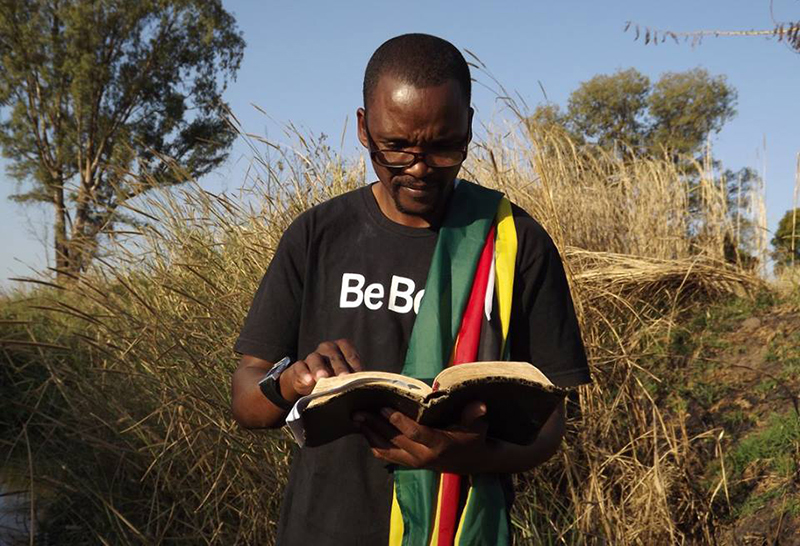 CONTROVERSIAL cleric Pastor Patrick Mugadza is set to resume his church services, a year since abandoning the pulpit while claiming then President Robert Mugabe was using state agents to terrorise his church.

The Kariba Remnant Church founder in May this year also announced that he was joining mainstream politics as Vice President of the United Democratic Movement (UDM).

At the time, he defended his decision saying this was not a “calling from God” but was one meant “to fulfil his interest in politics”.

The cleric, who rose to prominence through his one man demonstrations against Mugabe’s brutal regime, July 30 ran for the Gutu South parliamentary seat and lost.

Last year, he made headlines when he “prophesied” that Mugabe was dying in October 2017.

However, this did not come to pass as the 94-year-old veteran politician lives up to this date.

In an interview with NewZimbabwe.com, Mugadza, who had just returned from South Africa where he had gone soon after elections, said he was now refreshed enough to plot his next move.

“My going away was just to refresh after a hectic period of the stolen election. I am back to see what I can do next,” he said.

“I am yet to get what is exactly going on and make an appropriate move.”

Commenting on whether he was still a member of UDM led by female politician Violet Mariyacha, Mugadza said there were “issues” within the small opposition party.

“Yes, we have issues in the party (UDM) for now and so will give it time to know the way forward, seems I am caught in between,” he said.

“And I can’t share those issues for now, not yet sir. I need to have my facts right.”

He went on to say that he was going to resume church services because Mugabe was gone with hopes to do so freely.

“I had to stop services so that the system would not interfere with it but will resume soon,” Mugadza said.

“But I did not stop church for politics as such. I stopped because the CIOs were so much interested in the church activities and it was to find a loophole and cause damage to my personality and the church at the same time, thereby chocking my activism efforts.

“We still have a selfish system which is amazingly still so backward such that they don’t know what democracy and servant-hood demands.

“I think you are aware that I am an activist first before I am a politician. I love standing for Zimbabwe than standing for a ward or a constituency.”

Mugadza became known among Zimbabweans first time December 2015 when he bravely staged a one-man protest against Mugabe during a Zanu PF national conference in Victoria Falls.

He was to follow this with numerous protests against the Mugabe regime in Harare, sometimes adding drama by chaining himself to a street pole to symbolise lack of freedom.

When Mugabe was removed by the military led by then Commander Defence Forces Constantino Chiwenga November last year, Mugadza said he was going to name his son after the now Vice President as a “unique honour” for removing the former President.