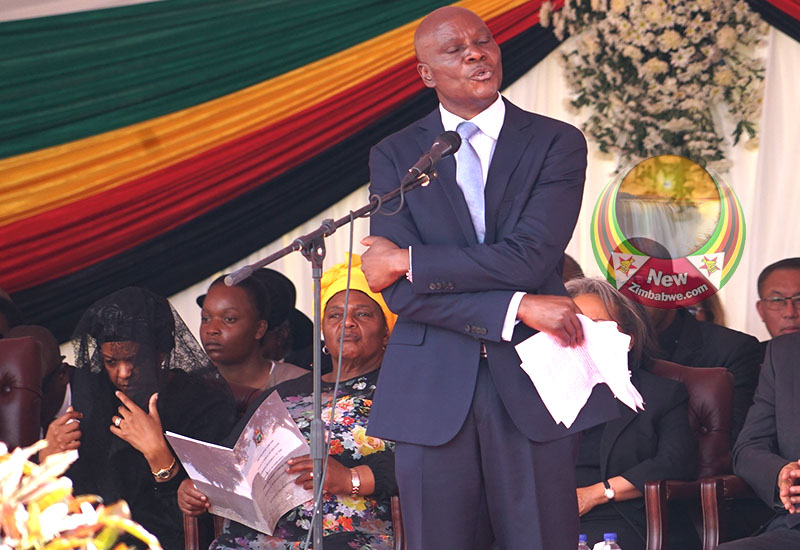 He was addressing mourners, among them several Heads of State and Government, at a funeral ceremony held in honour of the country’s founding leader, who died aged 95 in Singapore over a week ago.

The event was held at the National Sports Stadium in Harare Saturday.

Chidhakwa, who lost his post as a cabinet minister following the coup that toppled his uncle, said the late President had walked a difficult journey.

“I spent lots of time with him towards the end of his life.

“He was a sad man, a sad, sad, sad man. He recalled quietly the journey he had walked, a profound journey, a hard and excruciating journey, and thus must he leave,” Chidhakwa said with a voice quivering with grief.

He did not state what kept Mugabe sad.

Mugabe died nearly two years after he was forcibly removed from power by his long-time ally and now Zimbabwe incumbent, Emmerson Mnangagwa with the help of the military in November 2017.

He had led the country since independence from Britain in 1980.

Mugabe did not hide his anger for the betrayal, telling local and international media on the eve of the July 2018 election that he was voting the opposition.

He openly expressed how the “backstabbing” had hurt him.

Meanwhile, in his address at the funeral ceremony, Chidhakwa said the Mugabe family accepted that the former leader had been blessed with the gift of a long life but still felt it was too early for him to die.

“So we miss him already,” he said.

“We want to be with him. The mind knows that at 95, at some point we must go, but the heart wanted him to stay a little longer.

Chidhakwa said Mugabe was a unifier who detested tribalism.

“This is one of the greatest lessons we must give to our children,” he said.

“The language of unity and togetherness was his language. He detested tribalism; he wanted a nation that was united. He also recalled that the struggle had been won because of the uniting of the masses of Zimbabweans.

“I hope, I have confidence, that as we remember him, as we go through his memory, we recall his voice calling us to unity; bringing us together as a nation.

“Following the liberation struggle, Mugabe set out to unify his own family and families in Zimbabwe, asking clans to empathise and sympathise with one another.”