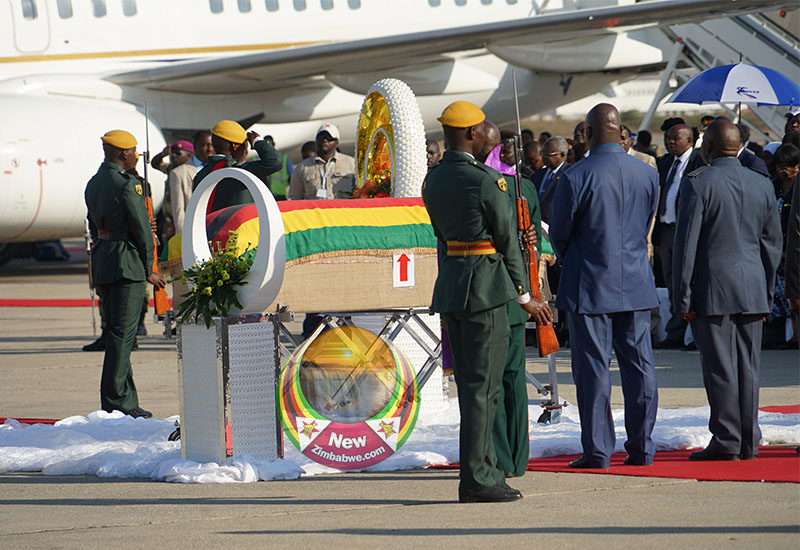 Foreign leaders, supporters and ordinary citizens gathered at a national stadium on Saturday to bid farewell to Zimbabwe’s founder Robert Mugabe, after a week of disputes over his burial that have threatened to undermine President Emmerson Mnangagwa.

Mugabe, who ruled Zimbabwe for 37 years until he was ousted by his own army in November 2017, died in a Singapore hospital a week ago aged 95.

He will be buried in a mausoleum at the National Heroes Acre shrine in Harare in about 30 days, his nephew said on Friday, contradicting earlier comments that the burial would be on Sunday.

Mnangagwa, Mugabe’s former deputy who conspired to topple him, said late on Friday that building the mausoleum would delay the burial of his predecessor.

“Today, let us put aside our differences and come together as we remember the past and look to the future as one proud, independent and free nation,” Mnangagwa wrote on Twitter on Saturday.

Mnangagwa and the ruling ZANU-PF party have wanted Mugabe buried at a national monument to heroes of the liberation war against white minority rule. But some relatives, expressing bitterness at the way former comrades had ousted Mugabe, had pushed for him to be buried in his home village.

Bright sunshine, enthusiastic crowds, and a fond, emotional farewell to Robert Mugabe at the National Sports Stadium here in Harare. True. But only up to a point.

As the casket carrying Zimbabwe’s founding father was wheeled into the stadium, it was immediately and uncomfortably clear that only a few thousand members of the public had bothered to show up for this funeral service.

African leaders, past and present, filed into the stadium to applause, alongside veterans of the continent’s liberation struggles. Mr Mnangagwa – the man who overthrew Mr Mugabe two years ago – sat just two seats away from Mr Mugabe’s widow, Grace.

The public tributes to Mugabe’s role as a liberation hero – paid by a succession of speakers including Kenya’s President Uhuru Kenyatta – came in sharp contrast to the final words of the Mugabe family’s own representative, Walter Chidhakwa, whose voice cracked as he spoke of his uncle’s final years after he’d been removed from office.

“He was a sad man. A sad, sad, sad man. It was a hard and excruciating journey.”

It was a powerful reference to the clear tensions that still exist between the current government and the Mugabe family.

More than a dozen current and former African leaders attended the funeral, hailing Mr Mugabe as a pan-Africanist who had dedicated his life to the people of Zimbabwe.

Kenyatta said he was unwavering in his insistence that Africa’s problems demanded African solutions.

Later the crowds booed and jeered at South African President Cyril Ramaphosa – which appeared to be a reaction to the xenophobic violence across South Africa in the last month.

He acknowledged the boos by saying “in the past two weeks, we as South Africans have been going through a challenging period. We have had acts of violence erupting in some parts of our country… This has led, as I can hear you’re responding to, to the deaths and injuries of a number of people”.

But he insisted: “We as South Africans are not xenophobic”.

The funeral follows a row between the Mugabe family and the government over his burial.

It has now been agreed that he will be buried in the National Heroes’ Acre monument in Harare, his family says.

Family spokesman and nephew Leo Mugabe says this should be in about a month, when the new shrine to Mugabe will be built at the existing Heroes’ Acre.