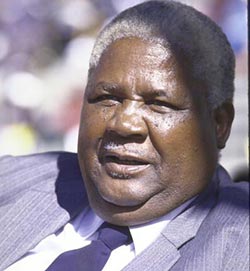 THE so-called Entumbane disturbances of November 1980 and February 1981, during which President Robert Mugabe’s then guerrilla army, Zanla, fought that of his nationalist rival Joshua Nkomo’s Zipra, are typically cited as among the more important precursors of the Gukurahundi massacres of 1983-4.
And so they were, but not in the way Mugabe and others would have us believe.
The fighting did not constitute a bald and unprovoked coup attempt by Nkomo — the first of a series of seditious acts that forced Zanu PF to react belatedly and violently in early 1983.  It was, in fact, Mugabe, not Nkomo, who deliberately brought Zimbabwe to the brink of civil war within a year of Independence.
What prompted the Gukurahundi, during which thousands of Ndebele-speaking civilians were murdered by Mugabe’s North Korean-trained soldiers? There is a persistent view in some circles that the killings, while “horrific” or “regrettable”, were a response to a complex and escalating array of existential threats to the state.
The basis of this position is that the Mugabe government was fundamentally defensive in the early years of independence; faced with a multitude of foes who remained strong after a negotiated end to the Rhodesian civil war, the regime was obliged to be cautious and reactive in the 1980s.
Nothing could be further from the truth.
For the many who regard Mugabe as the devil incarnate, evidence is barely necessary to convict him of every evil that has been visited on post-Independence Zimbabwe — and the Gukurahundi is chief among them. But others lay claim to a more nuanced approach. They are an otherwise incongruous assortment of regime critics and apologists, yet in their attempts to explain the killings, they have this in common: all rely on an appeal to “historical context” and a supposedly superior grasp of events between 1980 and early 1983.
Context and an understanding of chronology are, of course, vitally important, but a closer look at this period shows that the purportedly more sophisticated viewpoint is almost as superficial as the one which is reflexively anti-Mugabe. Some have come to this alternative view because they know only half the story, though others — among them, a few prominent perpetrators — are motivated by duplicity. Mugabe’s current Vice-President Emmerson Mnangagwa, is one of the second group.Advertisement