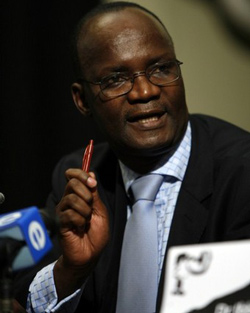 CONTRARY to prevalent opinion, Professor Jonathan Moyo’s trouble with Robert Mugabe and some die-hard Zanu PF old guards did not suddenly explode with Mugabe’s tirade at the burial of Nathan Shamuyarira. No. Moyo was under attack from the time Mugabe publicly recognised and thanked him for engineering Zanu PF’s much unexpected victory in the 2013 election.
Students of power politics will note that the very announcement that Moyo occasioned the electoral victory that shocked the thinking world, split the MDC-T, and continues to occupy political talk throughout the world was an invitation for fear and hatred for Moyo, first in Zanu PF and next in the opposition that then saw Moyo as that willy fellow who once again bandaged a dying snake and sentenced Zimbabwe to another term of venal Zanu PF and Mugabe rule.
Mugabe might have said it in genuine gratitude for a resounding victory that he did not imagine was possible but the effect that the statement of recognition and praise for Moyo had was to alert the sleeping dogs in Zanu PF that Moyo was no longer a common soul but a monumental power player and one that was indispensable. Added to the fact that Mugabe appointed Moyo a minister after having stressed that those who lost their constituencies in the elections were not to be considered, it became clear that when it came to Moyo, the political rules can be bent.
In common logic this was understandable because Moyo took leave from his constituency duties to craft stratagems of Zanu PF victory at national level and so was not expected to harvest any meaningful votes in his own turf. In political logic however, this meant that Moyo had suddenly become an undeclared member of the Presidium who delivered for the party what none of the Doctors and Generals in Zanu PF could deliver without the use of violence and other old-fashioned political tools of coercion.
What is happening to Jonathan Moyo in Zanu PF, I suggest in this article, is an important vantage point from which to try to decipher the true historical and political condition of not only Zanu PF, which might soon suffer its own split, but that of Zimbabwe which is boiling toward inevitable political change and renewal, if not for better for worse.
Of Kingmakers and Matchmakers
The political history of Kingdoms and principalities is littered with anecdotal evidence that those who make kings and shape kingdoms normally suffer or die for their rare abilities. There is an old Zulu proverb that says “umbeki wenkosi kabusilayo” which is a pithy suggestion that the one who installs the king normally does not go on to rule alongside him, but he is killed or dispensed with somehow.Advertisement