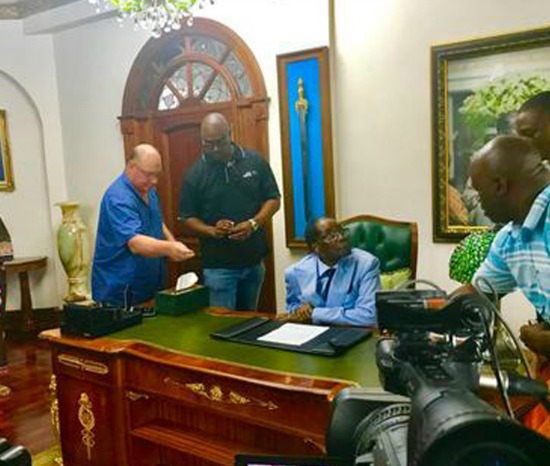 FORMER President Robert Mugabe has described the change of government in November last year as a coup.

Mugabe told journalists at his first media briefing since being deposed that the military had helped President Emmerson Mnangagwa takeover power unconstitutionally.

“It was a coup. He (Mnangagwa) could never have assumed the presidency without the army,” a vintage and belligerent Mugabe said.

The former Zanu PF leader in his address to citizens broadcast on national television a day before he resigned said the military action that had confined him to his home was constitutional.

But Thursday Mugabe recalled events of the military intervention that paved the way for Mnangagwa’s rise to power two weeks after he had been fired from government as vice president.

“The army made sure the other organs of the State are neutralized, some people were bashed and others are still missing to this day. They neutralized the CIO, the police had their armoury emptied,” Mugabe said.

He seemed to suggest the military had hidden from him arms of war that were produced for the coup.

“Tanks we never knew we had rolled into the city. I had been told the only tanks we had were from the 1940s. But here they were rolled into town and people were not allowed to move around without permission from the army. It was truly a military takeover. I don’t know what you want to call it.

“Our people had never experienced such an environment. We prided ourselves on being democratic,” he said.

Mugabe wistfully wailed about his relationship with Mnangagwa from the first government after independence and during the struggle for majority rule against colonialism.

“I was always with Emmeron Mnangagwa, I brought him into government but never thought he would be the man to turn against me.

“I never thought this would happen when I natured him and worked so hard while in jail to save his life when they wanted to hang him,” said the former President.