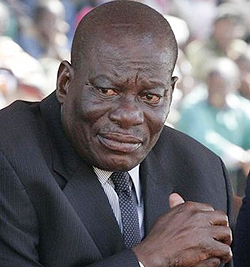 THERE is an African saying that when a leopard wants to eat its young ones it first accuses them of smelling like a goat. Today our President is accusing us of smelling like goats. Zimbabwe is witnessing a revolution eating its children. ZUNDE condemns in the strongest terms the persecution of war veterans by President Robert Mugabe.
This is not to say war veterans are blameless. In my recent article I challenged them to publicly and sincerely apologise for the shameful roles they played in bringing misery to our people over the years. I hope they heeded the call.
Mugabe has started a war that will ultimately consume him. By coming down heavily on Douglas Mahiya and others who issued a statement that merely repeats what everyone else is saying, Mugabe has unleashed an onslaught that will ultimately consume him and his children.
What did Mahiya say that is not being said already? Does it really make sense to incarcerate a leader of the war veterans who spoke on behalf of his members and who is merely repeating what the suffering people of Zimbabwe have been saying for over a decade now? Mugabe is demonstrating beyond any doubt that he is the tyrant and the dictator that we all know him to be.
Suddenly the war veterans are not allowed to express themselves honestly without being accused of undermining the authority of the President. What kind of political dispensation are we talking about in Zimbabwe? You stand up against Mugabe at your peril — that is what we now know.
The war we fought against Ian Smith (not the British as Mugabe wants the world all to believe) was not about one man. During our military training whenever we went on toyi toyi (jogging) we always chanted mauto evanhu (people’s army). Not once did I hear anyone say we were Mugabe’s army. Suddenly today Douglas Mahiya and other war veterans are incarcerated because they have collectively exercised their right to freedom of speech and association. They have denounced Mugabe for who he really is and declared that they will not stand by him anymore in future elections.
Mugabe never identified himself with ZANLA during the war. He only used us as a stepping stone towards becoming President of Zanu PF. Not once did I ever meet Mugabe during the struggle. I only saw him for the first time when we came back home in 1980. Mugabe never visited us in the camps to see how we were doing. We were with Josiah Tongogara and Rex Nhongo (Solomon Mujuru) all the time. Mugabe was just nowhere to be seen. He was too afraid to get into the shooting war. I do not think he even visited Nyadzonya where thousands still lie buried today.Advertisement

It does not surprise me when he attacks comrades who have exercised their rights as citizens and throws them in prison. He is demonstrating that he never had any love for us after all. It is time that all comrades, including Mandi Chimene, realise this. You do not stand by the side of a monster against your kind. Eventually, he will turn against you when there is no one left to devour. I am one of those same children of the revolution who have been cast out into the endless cold away from the people I fought for. To think that I now have lived 10 years of my life in exile away from the country I helped to liberate is heart-breaking. Mugabe does not care about me and the rest of the comrades because he was never a comrade in the first place.
Justice Benjamin Paradza is an exiled Judge of the High Court of Zimbabwe