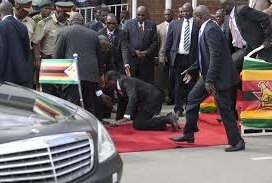 ONE of the mostly firmly held imperatives in traditional African society is respect and compassion for the elderly. If the taboo is flouted, it implies something is very seriously amiss with a particular old person.
So when Robert Mugabe, Zimbabwe’s president who turns 91 on Saturday (February 21), missed his footing as he stepped off a podium to land hard and on his hands and knees, the reaction was a national outburst of jubilation.
His close security ordered photographers to delete the frames, but a few slipped away into the crowd, the images safe on their mobile phones. Within a couple of hours, pictures of the tumble had swamped the internet, reaching the country’s remotest villages and the Zimbabwean diaspora across the globe.
Then came the digitally altered “memes” that unflatteringly violated the respect rule: the irony of him fleeing one of his own whip-wielding riot police. And the Head of State and Government and Commander-in-Chief of the Armed Forces of Zimbabwe, to give him his full honorific title, on his hands and knees, being mounted from the back by a poodle.
Even Zimbabwe’s two independent daily newspapers, Newsday and the Daily News, didn’t expect the strength of the reaction. They put the pictures of the fall on their front pages and upped their print runs sharply. They each sold out, for the first time ever.
If Nelson Mandela had fallen in public, the publicity may have been perhaps as intense – but it would have been alarm and compassion. It is also unlikely that Mandela’s aides would have attempted to censor the images.
For all but a small coterie of ostentatiously wealthy political cronies, Mugabe has brought death, pain, ruin, hunger, poverty, disease and despair to the people of Zimbabwe. And after 35 years, Africa’s second-longest ruling leader, he still won’t go away, promising at his party’s congress last December that he’s staying put until he dies.
For years he and his blackguards have lied about his numerous trips to the Far East for medical attention, claiming his several weeks in Singapore were for a cataract operation, which for ordinary folk is a five minute procedure and immediate release. He returns and the public is told he is “fitter than two fiddles.”
The day after the fall, state newspapers tried desperately to play down the incident. He hadn’t actually fallen but tripped on a lump in an ill-laid red carpet, and then steadied himself (on his hands and knees?). He was at his office the next day at the usual time, “his usual sprightly self,” they chirped.Advertisement

The truth was they fooled no-one. Their attempts to cover it up made it worse. The fall was a thrilling vindication of the absurdity of him clinging to power, as well as a sadistic pleasure at seeing the man ascribed with godlike powers by his cronies, become like any old person, physically out of control and in shock, fear and pain.
Mugabe is wounded in the public eye now, his stature and the awe in which he was held is diminished. It breeds hope that the end is nearing. His hold over Zimbabweans is seriously undermined.
And when he eventually dies, the release of pent-up longing can be expected to turn into open, wild elation.
But there is more trouble in the family. They left Harare before Christmas on their annual holiday in the Far East and Mugabe returned in late January, alone. He announced to the usual bussed-in crowd at Harare airport that his wife, Grace (49), was recovering from an appendectomy she underwent in Singapore.
She returned unexpectedly on Sunday (Feb. 15). The state propaganda Herald newspaper pictured her on the front page as she arrived at Harare airport, looking years older than the firm-faced, strong, lively woman she was in early-December.
She looked as she had lost weight around her face and upper body, two long deep lines marked each side of her face and she had dark rings about her eyes.
She delivered an inexplicably long and detailed history of her health: a tonsillectomy when she was 31 (she thought her cook was feeding her “potions”), a gall bladder operation at 39 and this time, she said, she developed an inflamed appendix, and had it out. It went septic and the incision had to be reopened. She said had been experiencing pain in her side “for years.”
“The medical community certainly doesn’t believe it’s appendicitis,” said a leading Harare medical specialist. When the appendix becomes inflamed, the pain is felt acutely within days, not years. “The length of time she has been experiencing pain is not indicative of appendicitis. How she looks in the paper and the time elapsed since the operation, suggests chemotherapy (for cancer),” he said.
Again, Mugabe’s goons made sure they aroused suspicion about her appearance at the airport when they barred the independent newspapers’ photographers from the tarmac welcome.
Her appearance and her story have thrown the future of the leadership of Mugabe’s ZANU(PF) party into confusion. Grace at their marriage in 1996 was suddenly became critically important in the party, as she held the key to access to her husband.  A presidential appointment depended on Grace’s favour.
In the latter months of last year, she launched a countrywide campaign of vicious tirades against Joice Mujuru, the long-serving vice-president who stood to succeed Mugabe on his death or retirement. Mujuru and the faction which supported her were hurriedly expelled from office and replaced by the other faction dominating Zimbabwe politics, under the sinister party veteran, Emmerson Munangagwa.
Grace was made head of the party women’s league and at the end of December was at the apex of her power, widely perceived as the successor to Mugabe – “a bedroom coup,” as a now dismissed top party official remarked. All that is suddenly wildly uncertain.
Mnangagwa remains vice-president and ready to step into Mugabe’s shoes without Grace. He is not popular, is inarticulate (though a lawyer) and now potentially subject to the African presidential tradition of never publicly announcing your successor because he or she will immediately become impatient for your departure or death.
And the large, still influential Mujuru faction licking its wounds is a threat that will not disappear. Zimbabwe’s sundered opposition movements have been talking about “national convergence” against ZANU(PF) and recently feelers were put out to Mujuru.
Add this all to the economy sinking steadily into dormancy, a government unable to pay civil servants (universities went on strike last week, unpaid since October), worsening joblessness and an executive incapable of acting quickly to attract investment.
Again, Mugabe’s Zimbabwe becomes the centre of toxic political and economic instability in Southern Africa, bleeding refugees, blocking transport routes and frightening off investors when his neighbours could most do without it.
Jan Raath is a veteran Zimbabwean journalist with more than 30 years of experience. This article is taken from politicsweb.