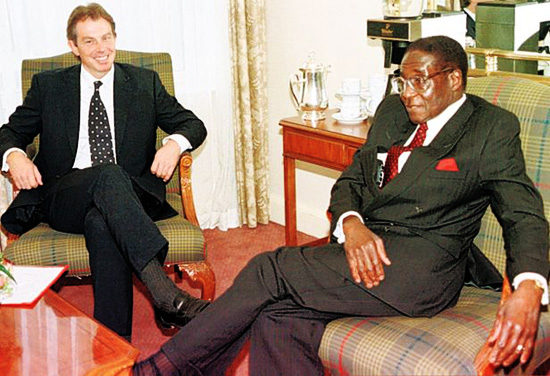 I CAN’T imagine that anyone in his right mind would actually want to go to the 91st birthday party of Robert Gabriel Mugabe which takes place this Saturday.
It promises to be an event of truly spectacular moral ugliness. While his people are starving, the ancient despot will convoke 20,000 cronies at a kind of golf club-cum-safari lodge near the Victoria Falls. In scenes reminiscent of the more disgusting and luxurious behaviour of the emperor Commodus, he will cause various exotic beasts to be slaughtered for the feast.
Five impalas will be roasted, two sables, two buffaloes – and then, to the ululations of his drunken Zanu-PF supporters, there will be a series of culinary climaxes, each more revolting than the last. A local farmer has procured two elephants, and after these rare and majestic creatures have been butchered for the delectation of the semi-deified Mugabe, there will be one more type of meat to come – an animal that you might think was semi-sacred, whose killing should be taboo, a creature that people would never normally dream of eating. Yes, a lion, the king of the animal kingdom, will lay down its life before the meat-maddened mob and have the honour of surrendering its mortal flesh to the palsied gullet of the man who still calls himself the “Hitler of Africa”.
And then, at last, the cake will appear, predicted to weigh 200lb, and in the most depraved and demoralising vignette of all, this crowd of brainwashed Zimbabweans will sweetly sing Happy Birthday to the man who has impoverished their country. This birthday party is predicted to cost $1 million at a time when Zimbabweans are living on 35 cents a day. Teachers across the country have been forced to contribute $10 each to put on the show.
The whole exercise is utterly nauseating – and my only question, as I say, is who on earth would want to be there?
Who is going to be toasting Mugabe in champagne and Tusker lager? Who is going to feature in the photo spread in the Zimbabwean equivalent of Hello! or OK!? I doubt that Britain will be represented at all – but by rights there is one man who damn well should be there, one man who should be down on the dance floor with Mugabe’s buxom assistants, and flashing his familiar glistering smile at the gathering.
If there were any justice in the world, that man would break off from giving advice to sundry other dubious regimes and help old Bob with the job of blowing out his candles. And that man, naturally, is Tony Blair.Advertisement

Zimbabwe is now the second poorest nation on earth – beaten only by Congo for overall grimness. The people are so badly malnourished that one in three children is physically stunted, according to the UN. If you go there you see the ravages of HIV, the emaciated figures standing listlessly on street corners. Companies are constantly going to the wall.
But it is vital to recognise that Zimbabwe was not always like this, and did not have to be like this. This Mugabe tyranny is no accident – and Britain played a shameful part in the disaster. Readers will remember the 1979 Lancaster House Agreement, by which Margaret Thatcher granted independence to Rhodesia. At that time the country was a breadbasket, a flourishing agricultural producer, with about 6,000 commercial farmers. The only trouble with those farmers was that the most successful of them were white – and Mugabe’s long reign has been characterised by one overwhelming objective: to exterminate the last vestiges of white power, whether political or economic.
As he has said: “The white man is here as a second citizen. The only man you can trust is a dead white man.” So it was crucial that the Lancaster House Agreement protected the interests of these white farmers. They could, of course, be bought out, but their land could not be simply seized. There had to be a “willing buyer, willing seller”. The British government agreed to fund the arrangement, compensating the former colonial farmers for land that they gave up. Under that arrangement the white farmers were able to survive – more or less; Zimbabwe remained economically viable – more or less.
And then in 1997, along came Tony Blair and New Labour, and in a fit of avowed anti-colonialist fervour they unilaterally scrapped the arrangement. The overseas development minister, Clare Short, made it clear that neither she nor Blair gave a stuff about the former colonial farmers. As she put it at the time: “I should make it clear that we do not accept that Britain has a special responsibility to meet the costs of land purchase in Zimbabwe. We are a new government from diverse backgrounds, without links to former colonial interests. My own origins are Irish and, as you know, we were colonised not colonisers.”
It was that betrayal of Lancaster House that gave Mugabe his pretext to launch his pogroms against the whites. I remember going to a place called Mazowe, not far from Harare, where Mugabe now has one of his vast personal ranches. I met an old ex-Rhodesian couple whose family came from near London, whose kitchen dresser bore the medals their relatives had won fighting for this country. I remember them physically trembling with fear of the Zanu-PF thugs who were waiting at the gate to their farm; and it wasn’t long before they were gone – driven out by sheer intimidation. They died not long afterwards.
The Labour government enlisted this country in all sorts of wars around the world, some more disastrous than others. British soldiers went to fight and die in Iraq, in Afghanistan, in the Balkans. Here we had people with close relatives in our own country – yes, our own kith and kin – and we did absolutely nothing. We turned our backs on the very people who were actually indispensable to the economic well-being of Zimbabwe, and Labour essentially allowed Mugabe to launch a racist tyranny.
It was Labour’s betrayal of the Lancaster House Agreement – driven by political correctness and cowardice – that gave Mugabe the pretext for the despotic confiscations by which he has rewarded his supporters. And that is why Blair should be there: to mark Labour’s special contribution to the tyrant’s longevity in office.
Boris Johnson is the Mayor of London and a former journalist. This article is from the Telegraph newspaper.