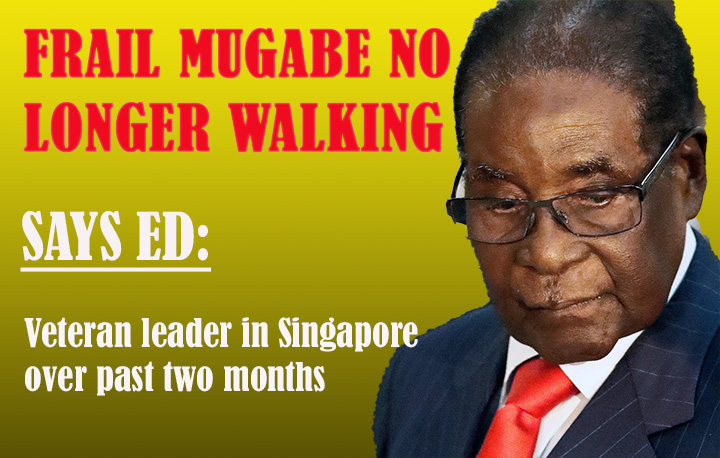 FORMER president Robert Mugabe is now unable to walk and has been in Singapore over the past two months for medical attention.

This was revealed by President Emmerson Mnangagwa Saturday while addressing a Zanu PF rally at Murombedzi Growth Point in Mashonaland West province.

The rally is the first of a series meant to thank voters for backing him and the ruling Zanu PF party in the bitterly disputed July 30 elections.

According to Mnangagwa, Mugabe has been in the Asian island city state of Singapore over the past two months for medical attention.

Mnangagwa told the gathering at Murombedzi that, Mugabe, now 94 years old, is no longer able to walk, adding that the government would continue to look after him.

“He (Mugabe) is now old. Of course, he now is unable to walk but whatever he asks for we will provide.”

The veteran leader was however, on the mend and now expected back home at the end of the month.

“He should have been back on October 25 but his health was not yet good,” Mnangagwa said.

“But yesterday we got a message that he thinks he is getting better. He will come back on 30 November.”

Mugabe, Zimbabwe’s ruler over the first 37 years of independence, suffered an inglorious end to his reign at the hands of trusted allies last November.

He gave in to pressure from increasingly powerful wife Grace and her G40 allies to fire Mnangagwa as internecine squabbling over his succession came to a head.

The army however, intervened by taking over power and effectively placing Mugabe under house arrest while Zanu PF initiated impeachment proceedings.

This forced Mugabe to resign, resulting in Mnangagwa taking over power.

The irony of holding a celebratory rally in Mugabe’s home district on the anniversary of the veteran leader’s inglorious exit from power was not lost on Mnangagwa on Saturday.

He reiterated his respect for his mentor, making it clear that Mugabe was the undisputed founding father of independent Zimbabwe.

“He (Mugabe) is the founding father of the nation of Zimbabwe,” said Mnangagwa.

“He is our founding father of a free Zimbabwe. There could be others who would want to distort our history, but they should also know that Zimbabwe’s founding father is Gushungo.”