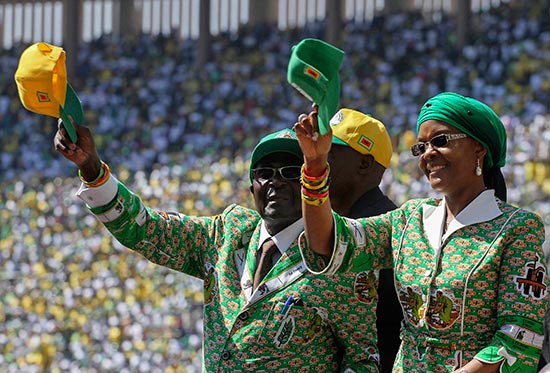 IN 2016, as President Robert Mugabe celebrates his 92nd birthday and 36th year in power, Zimbabwe stands on the brink of another meltdown. The country’s current economic insecurity and political conflict are reminiscent of 2000–08, when hyperinflation and electoral violence were rife. This time, however, the stakes are even higher as a floundering authoritarian regime faces a leadership succession with little clear guidance on how to navigate the transition.
From its independence in 1980 to 2009, Zimbabwe was dominated by Mugabe’s party, the Zimbabwe African National Union-Patriotic Front (ZANU-PF). A strong showing by the opposition Movement for Democratic Change (MDC) in the 2008 general election led to the country’s first-ever coalition government in 2009. But that government fell with the controversial 2013 elections, which were decided in favour of the ZANU-PF by implausibly large margins. Now unrivalled once more, the ruling party has failed to offer anything in the way of economic or political reforms. But, if anything, recent electoral success has weakened the ZANU-PF by concentrating political competition within it.
As if struggles within the ZANU-PF over the succession to the presidency weren’t bad enough, Mugabe’s advanced age and failing health have also left him increasingly unable to control events. And so the country is transfixed by a macabre death watch and an internecine power struggle, and the longer they go on, the more likely that any political transition will be unpredictable, disorderly, and perhaps even violent.
HARD TIMES
After a brief period of recovery earlier this decade, Zimbabwe’s economy has sharply declined. GDP is effectively flat, manufacturing enterprises are rapidly closing, and unemployment is skyrocketing. Revenues from diamonds, platinum, and gold—mining is Zimbabwe’s most productive sector—rarely reach the national treasury. As a result, an insolvent government is unable to pay civil servants and pensioners on time (it gives priority to the armed forces and war veterans). Meanwhile, private-sector banks and their customers face acute shortages of cash. Up to nine out of ten Zimbabweans now piece together their livelihoods through petty trade, subsistence agriculture, or artisanal activities, and many families depend on remittances from relatives working in southern Africa or abroad.Advertisement