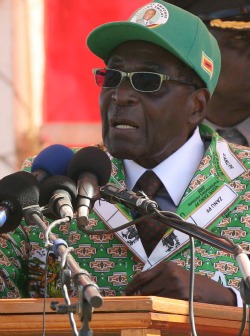 PRESIDENT Mugabe was at it again last week, calling for White Zimbabweans to go back to the land of their forefathers. He was quoted as having said; “The British who are here should all go back to England. What is the problem – don’t they (whites) know where their ancestors came from?”
Following President Mugabe’s ranting closely, one can deduce that according to his line of thinking, anyone with forefathers or ancestors not originally from Zimbabwe must leave the country or has no right to Zimbabwean citizenship. But what are the ramifications of such public pronouncements by the head of state?
Zimbabweans with foreign ancestry
In President Mugabe’s view, does it mean that any Zimbabweans born in this country, but with foreign ancestry are henceforth not entitled to live in the country and must go back to the lands of their ancestors?
Can the same statement be construed and extended, for example, to Zimbabweans of Zulu origin who came into modern day Zimbabwe in 1830 under king Mzilikazi, 60 years before the arrival of the British in 1891? Are these fellow Zimbabweans also not likely to fall victim to such divisionary and segregationstic ranting from the Head of State in future? Could this line of thinking explain why the President has not officially apologized for the 1980’s Gukurahundi mayhem in Matebeleland? Must we continue to allow the President of the country to divide people on the basis of their origin and race in clear breach of the provisions of our constitution which accords equal citizenship to all the people born in Zimbabwe?
Foreign ancestry for the President
The current Wikipedia posting on Robert G. Mugabe, states that; “he was born to a Malawian father; Gabriel Matibili and a Shona mother; Bona”. Some of President Mugabe’s siblings use the surname Matibiri, which is a close resemblance to Matibili. President Mugabe has never publicly disputed all these reports pointing to the fact that his father was a Malawian born immigrant labourer.
Why does President Mugabe not want to apply his line of thinking to himself as well? If White Zimbabweans with foreign ancestry do not have a right to live and own land in Zimbabwe, why is he entitled to the same when his father and his ancestry line originate in a foreign country; Malawi? Could this be a clear case of hypocrisy by the President?Advertisement