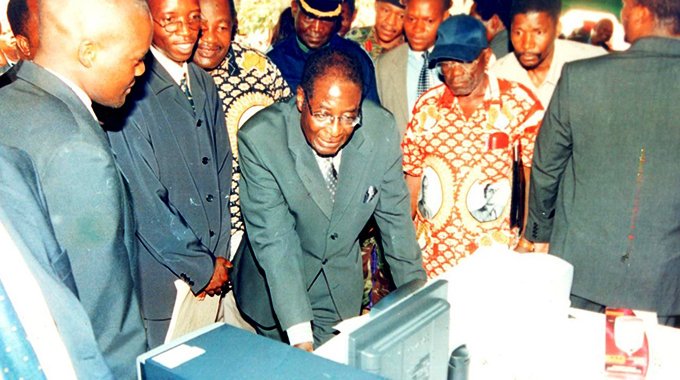 File Image: The then President Mugabe donating computers to Zwangendaba High in Lupane
Spread This News

AT LEAST 100 computers donated by the late deposed president, Robert Mugabe, to Arda Transau secondary school in 2010 are still lying idle due to lack of electricity at the institution, NewZimbabwe.com can report.

Internally displaced persons were relocated to the farm from Chiadzwa to make way for the largest diamond field in the country.

In 2000, Mugabe embarked on a presidential computer programme where he donated the gadgets to several government schools countrywide.

The move was aimed at transforming the education sector through internet learning at the primary and secondary school levels.

However, speaking to NewZimbabwe.com, Arda Transau Development Committee chairperson, John Makuyana said the Mugabe-donated computers were gathering dust at the local school’s lab, 12 years after the handover ceremony officiated by now President Emmerson Mnangagwa who was a minister at the time.

He appealed to the government to assist in electrifying both primary and secondary schools to promote e-learning within the displaced community.

“In 2010, the late president donated 100 computers at the secondary school, but they have not been utilised by students to conduct their studies due to lack of electricity,” Makuyana said.

He added: “Parents are failing to raise funds needed to connect the school to electricity due to abject poverty. We tried to install solar, but our efforts hit a brick wall as the system failed to provide sufficient power.

“We are kindly asking the government to help us in connecting the school to the national power grid.”

However, when reached for a comment, the deputy provincial education director (PED), Charles Mugano said the electrification of the school was not an Education Ministry’s prerogative hence his office will only liaise with the Rural Electrification Agency (REA) to address the problem.

“Our office can only liaise with REA so that we can find a solution to help this community. I have directed the Mutare district school inspector to look into that issue,” he said.

“We want all our schools to be connected to the power grid so as to ensure learning through digital technologies.”

Mugano suggested the Manicaland Minister Nokuthula Matsikenyere or the provincial secretary for devolution, Edgars Seenza were officials that can comment since the school was established by diamond mining companies which, operated in Chiadzwa.

Matsikenyere told New Zimbabwe.com that she would get in touch with mining companies in Chiadzwa, and assist in the electrification of the school.

” Let me get in touch with the Zimbabwe Consolidated Diamond Company (ZCDC) so that we may map a way forward. It’s not good for that school to operate without electricity because, without power clean water, e-learning and other necessities will be a challenge within the learning environment,” she said before urging all schools in the province without electricity to register with her office.