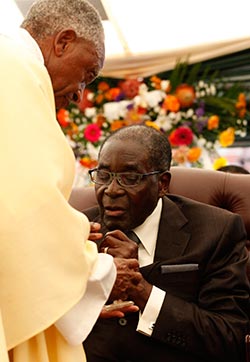 PRESIDENT Robert G. Mugabe is crazy or upright depending on whether you are crazy or upright yourself in that order. The President has been reported sick and dead on numerous occasions; that cannot be right. Considering that all reports have been false, it is not enough to sit on the sidelines and allow this to continue without caution.
Before plunging into my argument it is necessary to declare an interest; the same people who make these false reports on the president’s health are not ashamed of themselves. Neither do they regret making them. They are hardliners who find joy in celebrating sickness and death. It is the usual suspects whose characters have all attributes of a cold-blooded murderer similar to a character in a horror movie ‘Jeepers Creepers’.
By all forms of measurement, wishing for the President’s death is not a political issue but an ethical one. A president is a human being after all. Throughout the history of all contemporaries, life ought to be celebrated not mourned. Let alone the life of a veteran liberator, an African icon who, so far, has received more standing ovations than Sir Alex Ferguson and Arsene Wenger combined. He is a man whose contribution to humanity inspires millions of people.
Following the death of Nelson Mandela, it is hard to find an African leader who is remotely comparable to President Mugabe. Even though the President has lost popularity in recent years, he has gathered respect across the world. It is no small thing to choose to do the right thing if it causes one to be unpopular. In the end, respect for those seeking to improve the welfare of the masses always surpasses the hardliners hell-bent on destroying humanity’s very existence. It happens naturally. Very easily, President Mugabe is the best African leader of all time.
Meanwhile Morgan Tsvangirai’s character denies him the luxury of privacy. He is a man who calculated and pleaded for the imposition of sanctions on Zimbabwe. His entire establishment favours misery as opposed to joy, failure as opposed to success, hate as opposed to love. He is the sort of person who thinks nothing works without the white man. Not that anything is wrong with the white man (apart from his shocking greed and evil), it’s just that it is shocking how some people think they cannot do without them. In the same light, Tsvangirai resembles a ringleader of a pack of wild dogs. All his relationships either failed or expired.  Without being unjust, all his relationships resembled a high school crash.Advertisement

Sex, sex and more sex is the major highlight of the MDC-T leader’s existence. His failings are easy to point out yet difficult to fix. He had ample time to make a choice between romance and politics and, clearly, he chose the former and ignored the latter. The evidence is piling up against him. He is a nasty bit of work masquerading as a democrat yet he is an evil master of the dark forces. But, President Mugabe is no secular saint either, he has his failings as you would expect from a human being. Despite that reality, hardliners still seek to compare him to Mother Teresa. It is hardly fair to do so. His health is God’s business; they ought to be ashamed of themselves.
Despite all the media rhetoric, President Mugabe always emerges with the kind of energy expected of a high school athlete. The manner in which he hopes onto a plane at 89 resembles a football bouncing on a hard surface. He speaks with such a strong voice similar to a roaring lion. His eloquence is known world over and his towering wisdom is beyond question. Eddie Cross, after his foolish words recently regarding President Mugabe, will be humiliated to see our mighty man resume his duties soon. Sometimes the more the stench of evil surrounding our President the more God grants him time. In a country whose life expectancy is just over 36, it is obvious that a man who reaches the age of 90 is God sent.
The majority of us will hardly reach half that age; all the more reason to sing the President’s praises. Eddie Cross, not that he is an essential figure, can be reasonable at a time of his choosing. His “crossed” mind deserts him most of the time unfortunately. It is shocking that he still believes the Rhodesian era was better than now. He is a wicked Rhodesian failing to understand that good is better than bad. Inevitably, he is the best example of a wretched Rhodesian. In the midst of the hardliners seeking to encourage everyone to forget their history, Zanu PF, under the leadership of President Mugabe, has a history of producing a blend of the patriotic and the moderate.
Sometimes I wish these people could tell America to forget about Christopher Columbus’s 1492 journey to the Americas. Perhaps they should tell David Cameron to forget about Britain’s invasion by the Romans. In addition, during their spare time, they should tell the Australians to forget about their struggle leading to Australia becoming home to people from more than 200 countries. The notion that remembering your history hinders economic progress is rubbish. Remembrance of history itself is not a bad thing at all; forgetting it is.
Sadly, we join President Mugabe mourning the passing of Cde Bridget Mugabe, sister to the President. The President emerged briefly on that sad event. Therefore, Eddie Cross can go hang himself on the Cross. Soon the President will turn 90, and we cannot wait to celebrate that with him. Meanwhile, everyone should accord our hard-working president an opportunity to have a restful holiday.