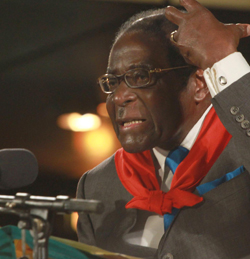 Here’s something about the continent of Africa I’ve been wrestling with for some time: a political leader can have tens of thousands of his citizens murdered and destroy his country’s economy, but he will still be hailed as a great leader and liberator if he stands up to “Western imperialism” and puts white people in their place.
Is the logical conclusion of such an attitude not that the lives of black Africans are regarded as of less value than those of paler descent?
It is this phenomenon that explains why many African politicians who come under pressure, including here at home, choose to blame threats of “regime change” and build up the West and white people as a common enemy around which they can mobilise.Advertisement

It also explains why the mantra of #WhiteMonopolyCapital was relatively successful in neutralising the narrative of state capture; why the EFF’s style of crude race-based politics gains at least some traction.
But rather than dismissing this as an irrational reaction by myopic people, we (we whites, mostly) should look deeper into history and consider that the worst damage that colonialism and white oppression had inflicted was spiritual and psychological.
The deepest wound caused by many generations of grave injustice, disruption and humiliation is people’s image of themselves and the undermining of their sense of dignity as human beings.
Robert Mugabe is the latest example of an African leader who had oppressed his own people, but was still honoured as a great African liberator.
During the mid-1980s Mugabe’s forces wiped out some 20 000 people in Matabelelend. Twenty thousand people, if not more, almost every one of them a civilian. It’s tantamount to ethnic cleansing.
In 2005 he launched Operation Murambatsvina to take revenge on the urban dwellers who had turned against Zanu-PF. It left nearly a million people homeless.
Mugabe, his family and his inner circle stole billions, defied election results, curtailed free speech and had opponents arrested, tortured or disappeared.
And yet, the army of Zimbabwe only acted against him – acted with great respect and observing all protocols, that is – after his wife started meddling in the affairs of Zanu-PF.
He was indemnified from prosecution and told he could keep all his ill-gotten wealth. As they were firing him, the leadership of Zanu-PF and the military still called him a great leader and an icon.
Even as tens of thousands of exuberant Zimbabweans were dancing of joy at his ousting, the ANC and the EFF in South Africa paid homage to Mugabe as a great leader.
Mugabe’s terrible record as president is discounted because of two achievements: the good education that young Zimbabweans enjoyed after 1980, and the allocation of land to black Zimbabweans after white commercial farmers were chased off.
The land issue dominates South Africans’ hero worship of Mugabe, or it has at least until very recently.
The fact that the violent and uncontrolled way in which land redistribution happened had mortally wounded the Zimbabwean economy, and that Mugabe and his wife took twenty of the best farms for themselves, and many Zanu-PF leaders, military generals and judges did the same, made no impression on this hero worshipping.
Hallelujah, the white settlers were taught a lesson and black Africans have their land back.
Even former president Thabo Mbeki – but Jacob Zuma and Julius Malema more enthusiastically so – praised Mugabe for this without qualifying that while the land was justly returned, it happened in a manner that led to bloodshed, instability and a quarter of the population having to flee the country.
One has to point out that this kind of blind praise and support of one’s own is not unique to Africa.
In Serbia, for example, war criminals like Slobodan Milosevic and Ratco Mladic are still widely regarded as heroes and victims of Western imperialism.
In South Africa there are many Afrikaners who still seem to think that apartheid leaders like HF Verwoerd, John Vorster and PW Botha are unjustly demonised.
So what does this forgiving attitude towards dictators and praise of monsters tell us, especially us South Africans?
Perhaps it tells us that the continuing inequality along racial lines is South Africa’s biggest threat.
Perhaps we should ask the question how black people can feel empowered and content if the wealth gap is still so outrageously high, when so many black people still make a living by serving white people.
It is experienced as an existential undermining of blackness and indigenousness, to a point where some may turn towards thoughts of vengefulness and ask: why have white South Africans paid no price for the evil of the past? Is it not time that they do?
This article is taken from News24