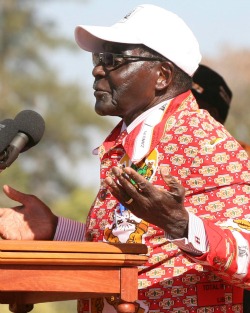 A version of this post originally appeared on the Freedom at Issue blog. The view expressed are the author’s own.
MORE than 100 days after he “stole” his latest re-election, it is safe to say that president Robert Mugabe has gotten away with the crime. Other leaders in the region may be studying his methods, which makes it all the more important for democracy advocates to do the same.
In 2008, Mugabe and his Zanu PF party essentially lost at the ballot box, and remained in power only by pursuing a campaign of political violence that caused his main presidential challenger to withdraw from the runoff vote. Moreover, amid international pressure and economic collapse, he was forced to accept a power-sharing agreement.
But this year Mugabe was able to engineer a win that did not trigger the same international criticism. Both the African Union (AU) and the Southern African Development Community (SADC) deemed the July 31elections to be “generally” credible, finding that any irregularities would not have changed the outcome: a supermajority in Parliament for Zanu PF and an overwhelming presidential victory for Mugabe.
In devising an election strategy for 2013, Mugabe had to account for greater outside scrutiny, as the violence of 2008 had put Zimbabwe permanently on SADC’s agenda. The updated election playbook also had to take into consideration the increased use of technology in Zimbabwe. Over the past five years, access to mobile phones has grown dramatically. According to the International Telecommunication Union, Zimbabwe now has an estimated mobile subscription rate of 97 percent. These new factors meant that Mugabe had to work harder and with more cunning. He could no longer use blatant election-day fraud or brute force to win.
Step one: Begin the rigging process well in advance.
In order to avoid any violence or overt manipulation on election day, Mugabe began his rigging activities well before an official poll date was even confirmed. The first voter registration drive kicked off in May 2013, focusing mainly on Zanu PF strongholds in the north. This allowed the party to get a head start in the process. Less than two weeks after the Constitutional Court’s ruling on an application to set an election date, Mugabe unilaterally announced that the vote would be held on July 31. Critics of the move argued not only that it violated the 2008 Global Political Agreement (GPA), which required the president to consult all parties when determining an election date, but also that the date itself contradicted provisions in the new constitution and reduced the number of days available for voter registration.Advertisement

Step two: Allow superficial democratic reforms, but keep big-ticket items off the negotiating table.
While the stated goals of the GPA were broad, its primary purpose—in the aftermath of the 2008 political violence—was to clearly outline the legal and institutional reforms necessary for the country to hold free, fair, and credible elections. Among the GPA’s 25 articles were provisions calling for a new constitution, depoliticization of state institutions and the security sector, liberalization of the media sector, and prosecution of the perpetrators of politically motivated violence.
The pact gave rise to a multiparty Government of National Unity (GNU), but after five years of power sharing, it had failed to implement almost all of the required reforms. The only task accomplished was the passage of a more progressive constitution and bill of rights. Mugabe interpreted the conclusion of the constitutional ratification process as marking the expiration of the GNU, meaning elections had to be held immediately, even though the basic electoral reforms prescribed under the new constitution had not yet been enacted. The absence of such reforms aided Mugabe in his efforts to manipulate the election process.
Step three: Take control of the state media.
Lack of media reforms prior to the elections had a significant impact on news coverage of the process. On election day itself, the media were highly polarized along party lines and generally biased in their reporting. According to the Media Monitoring Project of Zimbabwe, news outlets carried stories on all parties, but 90 percent of the coverage of the Movement for Democratic Change (MDC) was negative. It is noteworthy, if not surprising, that the biggest perpetrator of hate speech during the election period was Mugabe himself.
Step four: Stack the courts with supporters who will uphold your constitutionally questionable decisions.
Manipulation of the judicial system started early in the election process. In May 2013, following a court application in which an activist affiliated with ZANU-PF sought to “compel” Mugabe to set an election date, the Constitutional Court ruled that elections must be held by July 31. Despite domestic and regional pressure, the court ruled against postponing the vote by two weeks, declaring that election preparations were already under way. The Constitutional Court’s decision clearly violated the constitution, reinforcing the perception that it is a Mugabe puppet.
Step five: Seize control of the election machinery and make sure that your rigged triumph is plausible.
Determined to avoid another period of power sharing, Mugabe made a concerted effort to rig a margin of victory that would be plausible (something short of 99 percent), but also large enough to negate the need for a runoff vote. The incumbent president ultimately won 61 percent of the ballots, according to official results. He argued that he was able to obtain more votes than in 2008 because of a renewed effort to attract support through his indigenous and black empowerment programs. However, Mugabe also benefited from his heavy influence over the voter registration process. The chairperson of the Zimbabwe Electoral Commission, Judge Rita Makarau, was a former ZANU-PF lawmaker, while the registrar general, Tobaiwa Mudede, had been leading the registrar’s office for more than three decades.
Step six: Avoid the use of violence at all costs.
Demonstrating that he had learned the greatest lesson from 2008, Mugabe this time restrained party members and supporters, including youth militias, and prevented a repeat of the 2008 electoral violence. Only a handful of reports of politically motivated violence emerged on election day, and none garnered any significant international attention. Both SADC and AU observer missions were quick to declare the July 31 election peaceful, and therefore credible. Nevertheless, members of civil society and the opposition were subject to intimidation, arrest, and other forms of persecution throughout the election process. In the run-up to the constitutional referendum earlier in the year, nearly a dozen civil society organizations had their offices raided by state security personnel, and many prominent civil society leaders and human rights defenders were arrested on spurious charges.
Step seven: Declare that the people have spoken, and do not look back.
On August 22, Mugabe was sworn in for his sixth term as president with the same pomp and circumstance as in his first inauguration 33 years ago. The ceremony, held at the National Sport Stadium, was attended by foreign dignitaries and a crowd of 60,000. The event was initially delayed by a court petition filed by his main rival, Morgan Tsvangirai of the MDC, over allegations of widespread electoral fraud. But the Constitutional Court dismissed the case, declaring that the election was free, fair, and credible. Once the ruling was announced, Mugabe never looked back. Immediately after his inauguration, he appointed a new cabinet and began phasing out officials who were brought in by the MDC under the power-sharing government. Mugabe was also quick to place blame for Zimbabwe’s economic crisis on continued sanctions by the United States and Europe.
Having successfully overcome the electoral hurdle, Mugabe will face few checks on his power. The GNU’s failure to repeal restrictive laws – including the Public Order and Security Act (POSA), the Criminal Reform and Codification Act, and the Access to Information and Protection of Privacy Act (AIPPA) – means that the government will remain empowered to severely limit citizens’ fundamental freedoms of expression, association, and assembly. It also means that further declines in political rights and civil liberties will most likely occur, resulting in the re-emergence of a pre-2008 environment.
At the regional level, emulation of the Zimbabwean model is a growing concern. Over the next year a total of six countries in SADC will hold elections. Several of the votes are expected to be very contentious, and the incumbents up for re-election may use Mugabe’s playbook in order to secure a win, risking similarly disastrous results for democracy and human rights.