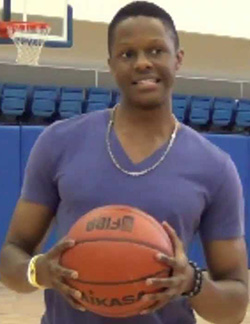 PRESIDENT Robert Mugabe’s son Robert Junior has been selected to represent the country’s national senior men’s basketball team in the Afro Basketball tournament that will be played in Tunisia this month.
The 22-year-old earned a place in the team, having also represented the national Under 18 side.
The tournament runs from August 19 to 30 with the Zimbabwe men’s basketball side making their first ever appearance at Africa’s biggest basketball showpiece.
Robert Junior is President Robert Mugabe’s elder son with his wife Grace and is studying at the American University in Dubai.
He is among a group of 15 players that will be leaving the country for Germany this weekend where they will conduct a “high performance training” ahead of the tournament that starts on August 19.
National team general manager Shinga Magede confirmed Robert Junior’s inclusion in the team and said he had been practicing with the rest of the team which has been in camp over the last two months.
“We are very happy about his performance and how he deals with other players,” Magede told Xinhua.
“He has been working hard like all the other players so that he can have a fair assessment.
“He is disciplined, has international experience and his inclusion in the national team is purely based on merit.”
His father has spoken publicly about his son’s interest in the game and revealed that had it not been for travel restrictions he would have wanted to go and pursue the sport in the United States of America.
The lanky Robert Junior also plays basketball at the American University in Dubai.
In 2010, he played for the Under 18 national side in Harare and his mother Grace, who is supportive of his sporting dream, attended the matches.
Magede said the organisers of the tournament in Tunisia had guaranteed security to the Zimbabwean team which also includes foreign-based players Wilson Juma and Vitalis Chikoko.Advertisement