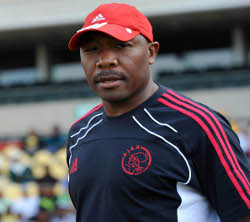 SOUTH African Premier League side, Amazulu FC, has appointed Zimbabwean Wilfred Mugeyi as caretaker coach for this weekend’s fixture as fans react angrily to the club’s poor run of results.
After seven matches, Usuthu are yet to win their first game of the season and have only three points, and are positioned in 16th spot in the Absa Premiership standings.
Several fans marched into the club’s training ground this week and voiced their unhappiness about coach, Craig Roslee.
They reportedly told general manager that they want the club to get rid of Rosslee.
Spokesman Philani Mabaso confirmed Mugeyi had been given temporary charge.
“The directors of the club have taken a decision to put Wilfred Mugeyi in charge as caretaker coach for Saturday’s Telkom Knockout cup match against Bloemfontein Celtic due to poor run of form and safety concerns,” he said.
The club decided to act after threatening messages were also sent to Rosslee during the week.
“Craig Rosslee’s contract with AmaZulu remains in existence until a further decision around the situation has been reached,” said Mabaso.
“The directors would then sit down after the Saturday’s game and decide the future of the team and the coaching department.”
Mugeyi joined AmaZulu in April 2013 as an assistant coach.
Rossle signed a three year contract with the KwaZulu-Natal outfit and is in his second year.
On Tuesday he vowed to stay put, saying only cowards resign.
“You’re asking me to go into battle and then when the firing starts I must run. Of course there’s pressure and that’s because I’m in the public eye.
“If I resign, what does it say about me that when the goings get tough, I must run away? You can’t do that.”