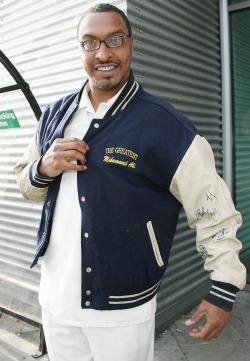 THE son of legendary boxer Muhammad Ali was detained by immigration staff who asked – ‘are you Muslim?’
A lawyer claims Muhammad Ali Jr, was asked targeted by immigration officials at a Florida airport who repeatedly asked about his religion and where he got his name.
Chris Mancini tells the Courier-Journal in Louisville that 44-year-old Muhammad Ali Jr. and his mother Khalilah Camacho-Ali, the second wife of Muhammad Ali, were arriving at Fort Lauderdale-Hollywood International Airport on Feb. 7 after returning from Jamaica.
Khalilah Camacho-Ali, who married the boxer in 1967, was in Jamaica with her son to deliver a speech on black history.
The boxer’s son was questioned for almost two hours by immigration staff who repeatedly asked him, ‘Where did you get your name from?’ and ‘Are you Muslim?’, according to Mancini.
The lawyer says officials continued questioning Ali Jr. after acknowledging that he was Muslim.
Ali Jr. was born in Philadelphia. He holds a valid U.S. passport and has no criminal record.
The lawyer said: ‘This is an outrage. I don’t know what’s going on with Mr Trump’s claim that his ban is not religion-based.
‘We do not discriminate in this country based on religion.’
U.S. Customs and Border Protection officials say they ‘cannot discuss individual travelers; however, all international travelers arriving in the U.S. are subject to CBP inspection.’Advertisement