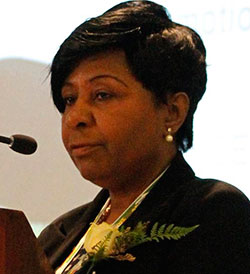 VICE President Joice Mujuru has described as “depressing” Zimbabwe’s balance of trade statistics while rallying industry to join efforts towards improving productive capacity.
Faced with declining capacity utilisation in the manufacturing industry which according to the latest figures is around 36.9 per cent, down from 44.9 per cent last year, the Zimbabwean economy continues to rely on imports.
But the reliance on imports has had a devastating impact on the country’s manufacturing industry which has seen hundreds of companies shutting down and scaling down operations.
In 2012, the country recorded a US$3.6 billion trade deficit as imports, at US$7.5 billion far outran exports which totalled US$3.9 billion.
Addressing the 2013 Zimtrade exporters’ conference, VP Mujuru said the government was “concerned” with the widening trade deficit.
“We need to be vigilant in defending the productive base of our economy by reversing the current trend,” she said.
“Government is concerned with the widening trade deficit and the continued decline in capacity utilisation in industry.”
Mujuru said the trade deficit could only be improved through improving the country’s export performance.
“The only sustainable source of export earnings is through the export of our valued added, competitive goods and services to the rest of the world,” she said, while urging industry to adopt new technologies which help in the production of quality goods.
She said the new government was, through its soon to be launched new economic blueprint the Zimbabwe Agenda for Sustainable Socio-Economic Transformation (ZimAsset), targeting to reverse the trend.
“This must stop. We must reverse the trend forthwith,” she said.
With industry choking on the back of a variety of challenges such as power shortages, lack of access to affordable long term finance, Mujuru said the government would through ZimAsset endeavour to address some of the obstacles to improved productivity.
“Government will through ZimAsset explore all means to access affordable sources of funding to capacitate industry,” she said.
The decline in industry performance had resulted in the country failing to take advantage of various trade opportunities in the region and beyond.Advertisement

Mujuru also called on Zimbabwean companies to adopt on-line retailing to reach out to a wider customer base.
Common Market for East and Southern Africa (Comesa) secretary general Sindiso Ngwenya said the decline in Zimbabwe’s industrial capacity had seen its export base not only shrinking but also shifting from manufactured goods to raw materials exports.
“By the end of 2012, Zimbabwe was a net importer of manufactured goods,” he said.
Ngwenya said Comesa, with a population of over 400 million, offered a huge market for Zimbabwean products.
Zimtrade chief executive officer Sithembile Pilime said Zimbabwe’s export performance has been on a decline in the past two decades.
“Our exports are now dominated by minerals unlike in the past where they were dominated by manufactured products,” she said.
Pilime said the country’s export market spread had also shrunk as it lost markets such as Germany and Switzerland.
The exporter’s conference ran under the theme: “Value chain business models: The key to competitiveness.”