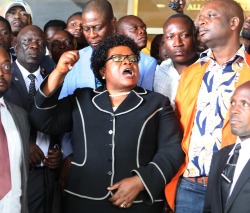 AS Martin Luther King once said, “There comes a time when silence becomes betrayal”, and surely 34 years of silence is betrayal of the highest order.
I am not going to analyse Mai Mujuru’s performance in recent interviews on the BBC’s HARDtalk and on Deutsche Welle’s Conflict Zone point by point. Suffice it to say she failed to sell herself and her party while on those platforms. Not only did she humiliate herself but she was an embarrassment to women, especially those aspiring to top leadership. Under the scrutiny of a world-wide audience, she mumbled through her responses to interviewers’ questions as she desperately tried to dissociate herself from her ZANU PF past.
Yes, Damascene moments do happen. However, Joice Mujuru being the Christian she is, would know that when Saul became Paul, he never disowned his past but sincerely regretted it.  In the opposition, we always knew that Mujuru came with some baggage but we were willing and prepared to give her a chance. There are no permanent enemies in politics.
Some readers will recall that I once castigated George Rutanhire for his unnecessary attack on Mujuru, especially on matters of her private and young life. I trust that demonstrates my consistency when it comes to issues of principle, fairness and justice.
Regrettably, recent developments have shown that Mai Mujuru is ashamed to offload her excess baggage in public. When ZUNDE cautiously “welcomed” her into the ranks of the opposition two years ago, one of the conditions we laid down for her was that she and her colleagues must “issue a formal and public apology for their involvement in past transgressions committed by ZANU PF, especially the violence of 2008 which is still fresh in people’s minds”. We challenged her and the other principals in ZimPF to publicly express their willingness to stand before a truth and reconciliation commission to account for their complicity in ZANU PF misrule”.
Our advice fell on deaf ears. Her disgraceful ordeal at the hands of the BBC reflects exactly why she needed to do what we suggested. People aspiring to high office cannot afford to lie with a straight face and hope to get away with it. Unfortunately, this is just what Mai Mujuru did.
Pretending not to have seen or heard any evil during her long service in ZANU PF was insidious — her responses were treacherous and deceitful. Through those two interviews in the last few days, Zimbabweans got to know her better than they have in her 34 years as a senior government official. She is now ethically and morally obliged to disqualify herself from the possibility of ever running for office as a future President of Zimbabwe.Advertisement

To say that Gukurahundi had totally nothing to do with her and her husband Solomon Mujuru is an absolutely damning untruth. While it is true that Mugabe was Commander-in-Chief of the Armed Forces, Solomon Mujuru was the army commander. Perence Shiri was a brigadier in the army commanding the 5th Brigade — he took orders from Solomon Mujuru. If indeed Robert Mugabe had “privatised” the 5th Brigade as Joice Mujuru argues, was not this a compelling reason for Solomon Mujuru and his wife to resign from their positions? They could have walked away with their integrity intact.
However to maintain that they knew nothing and heard nothing is to utter despicable lies. A cabinet minister and an army commander who know nothing about a genocide widely reported around the world demonstrates that either she is lying or the couple was culpably incompetent. There is nothing in between.
It is a known fact that Joice Mujuru and her late husband have vast wealth. Claiming, as she did, to own just one house and one farm is an insult to long-suffering Zimbabweans. Instead of misinforming the public, she should have grabbed the opportunity to explain how she and her husband acquired their vast wealth and exonerate herself in the process. It is not a crime to be rich. The Herald representing ZANU PF, as they always do, mocked her the following day by listing the entire estate owned by the Mujuru family. As the wife, she is the principal beneficiary of Solomon Mujuru’s huge estate.
Once again, I challenge Joice Mujuru to stop protecting ZANU PF’s secrets and legacy. If she really wants the opposition to take her seriously, she must take her gloves off and start throwing hard punches at Mugabe and his ZANU PF. She must also tell the truth about her direct or indirect involvement in ZANU PF’s nearly four decades of misrule. If she will not do this, we will take her as a spoiler in the opposition ranks with an eye on a future alliance between her NPP and a post-Mugabe ZANU PF.
Until the opposition, particularly Morgan Tsvangirai and the MDC-T are certain of Mai Mujuru and her party’s real intentions, they should be excluded from coalition discussions. We must not tarnish the grand coalition before it even takes off. It will be much better to have her split the ZANU PF vote in 2018 than to destabilise a united opposition. Temba Mliswa’s Norton victory that was brought about by united opposition is still fresh in our minds. It is a great lesson to learn from.
Having failed in 34 years to change things from within, what exactly does Mai Mujuru now want to change when, by her own admission, she didn’t know what was going on around her? As for her farm, she must be reminded that compensation is the responsibility of government not individuals. This is a matter she should have attended to when she was in government.
Mai Mujuru has two choices, to shape up and earn our trust or ship out and go farming.
Benjamin Paradza is the exiled Judge of the High Court of Zimbabwe and President of Zimbabweans United for Democracy (ZUNDE)
www.zunde.org; contact@zunde.org; @zundezim