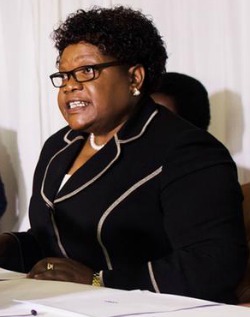 Former vice president Joice Mujuru said she is taking home just more than nine thousand dollars per month as part of her pension contributions since she became a government minister in 1980.
She also said that if she was legally entitled to some benefits as the former vice president she must be paid so that she can be able to meet all her obligations.
In an interview this week, Mujuru said despite all the speculation about her benefits, she is taking home just more than nine thousand dollars, half of which she is using to pay her workers and to pay off rates and bill arrears. She said the government refused to take care of her workers as part of her benefits.
Mujuru, who is now leader of the National People’s Party (NPP), worked as a minister between 1980 and 2004 which is when she was made vice president till 2014.
“Let me honest with you today, I am not staying in a government house and have never been allocated a government house,” she said.
“I am not receiving $15, 000 per month as has been reported somewhere.”
“Let me tell you today, I had to go to the bank and ask my personal banker how much was being deposited into my bank account.”
She added, “The banker said the money that you are receiving is your pension contribution from the day that you became a minister in 1980.”
“Your monthly pension is $9 300 33, that is what I am getting, and nothing more from what is being circulated.”
Asked if she would accept benefits from President Emmerson Mnangagwa’s government, Mujuru said if she is legally entitled to that she would gladly accept.
“If I am legally entitled why should I turn the benefits down,” she said.