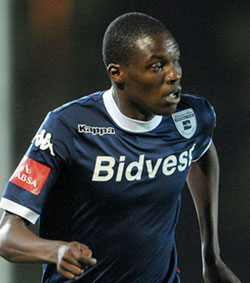 MIDFIELDER Denver Mukamba is trying to earn a loan deal at SuperSport United after failing to make an impression at Bidvest Wits.
The former Zimbabwe Soccer Star of the Year has been at SuperSport for a week, and his manager Gibson Mahachi says his client is hoping to get into a team where he plays regularly unlike at Wits.
“We discussed the issue of game-time for Denver with Wits because we feel that he needs some game-time next season,” says Mahachi.
Mahachi, though, says Mukamba will remain a Wits player as he has a running contract and will only move to United on loan should he impress Matsatsantsa coach Cavin Johnson.
“As I am speaking to you, Wits are working on ensuring that Denver’s work permit is renewed,” Mahachi adds.
Meanwhile, Johnson confirmed he is assessing the Zimbabwe international but said he is yet to decide whether to bring the 21-year-old on board.
“Mukamba is on trials with us since last week. At the moment I can’t says whether he will be signed,” says Johnson.
Mukamba joined Wits in 2012 soon after winning the league title with Dynamos and was crowned Zimbabwe’s Soccer Star of the Year.
However, he has failed to command a regular starting berth at the Students.
Two other Zimbabweans Thomas Sweswe and Tinashe Negomasha left Wits in the off-season after their contracts were not extended.Advertisement