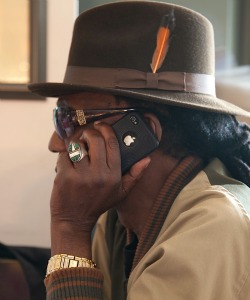 CHIMURENGA music guru, Thomas Mapfumo “plans to perform in Zimbabwe soon but will not jump into such a plan over an alarmist and unjustified request”, the board of Chimurenga Music Company has said.
The board was responding to musician Jairos Chabvonga who recently blamed Mukanya for staying abroad for too long urging him to return home.
“The notion by Chabvonga that Mukanya should return home and be successful like any big artists based at home sounds unfortunate and misplaced. This is a free world where Mukanya has been able to explore other global opportunities while still not forgetting his fans at home.
“In 2015 alone, Mukanya performed in 27 shows across the African continent as he touched base with many fans,” said a statement released by Austin Sibanda on behalf of the Chimurenga Music Company.
Sibanda said contrary to Chabvonga’s claims, Mukanya has never abandoned Chimurenga music.
“That’s the hallmark of his trade and the soul of his life since the sixties. In any case given the advanced modern technology every situation is now fluid since the world is now a global village. Mukanya’s music continues to impact many fans at global scale. The evidence is on social media.”
Sibanda said Chabvonga’s plea for Mukanya to urgently return was “unjustified and far-fetched”.
He said fans continue to access Mukanya’s music at any time, adding that distance or geographical presence of Mukanya at home was no longer a barrier to good Chimurenga music.
“Chabvonga’s sense of urgency could imply that either Mukanya comes to Zimbabwe today or else Chimurenga music is dead. That is ill founded and misplaced.
“There are many other home-based musicians singing Chimurenga music. That proliferation of musicians has produced a large sea of various Chimurenga music options. We are not sure what Chabvonga is missing from the music rubric.”
The statement added that Mukanya has maintained good contacts with his fans who continue to enjoy the music.
“Besides that, he (Mapfumo) plans to perform in Zimbabwe soon but would not jump into such a plan over an alarmist and unjusified request,” said Sibanda.
“Chimurenga music lives forever. We are not sure how Mukanya’s legacy faces extinction just because he is currently not home. It also sounds misdirected that just because Mukanya is not home that means he has stopped singing.Advertisement

“Choices vary with time but fans matter. For that reason alone, Mukanya has never and will never betray his fans, let alone the cause for Chimurenga music genre.”