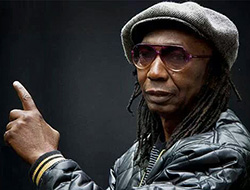 CHIMURENGA music fans in the United Kingdom will be up for a treat as Thomas Mapfumo returns to Europe after a two-year absence on September 27.
Mapfumo, popularly known as Mukanya, is in exile in Oregon in the United States.
He was last in the UK in 2012 when he performed with his two backing female vocalists and guitarist, Zivai Guvheya, who are all based in the UK.
Apart from performing in London and Leicester, Mukanya also performed at an outdoor event near High Wycombe and impressed hundreds of fans who attended the show.
The Chimurenga music icon, who will be backed by his eleven members of the Blacks Unlimited, is expected to sample songs from his new double album Dangerzone in a show dubbed “The Return of Mukanya’’.
An official with Mapfumo’s music promotion company, Blessing Vava, told NewZimbabwe.com in Berlin, Germany, this week that the UK show was organised in response to hundreds of calls from fans to return.
“The UK Bira will be opened by Kwekwe-based Disc Jockey, DJ Stavo, who has done remixes on some of Mukanya’s hits, followed by Afro-fusion songstress and sister to the late Andy Brown, Queen Mashie.
Zivai Guvheya, backed by the Heritage Survival Band, will be the last performing act before Mukanya comes on stage.
“The concert is being promoted by Chimurenga Music Company in conjunction with Yahweh Promotions,” said Vava.