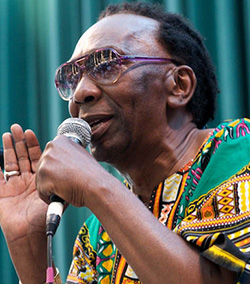 CHIMURENGA music icon Thomas Mukanya Mapfumo turned 72 last weekend and challenged Zimbabweans go vote in the next year’s elections to end President Robert Mugabe’s ‘dictatorship’.
Mapfumo left Zimbabwe in 2004 and has been domiciled in Michigan, in the United States since then. He left the country after being haunted by state security agents over his anti-establishment music.
Government had then embarked on its controversial land reforms which are blamed for crippling the country’s agro-based economy.
The music legend has unsuccessfully tried to return home, and continues to stage shows in neighbouring countries such as Mozambique and South Africa.
In his 72nd birth day message which he delivered at the Chinook Winds Golf and Casino Resort in Lincoln City by the Pacific Ocean, Mapfumo said Mugabe would not rule forever.
“To those at home, l salutes you for holding forth. I always say that governments come and go, political parties come and go too, presidents rule and go but the people stay,” he said while having lunch with other musicians.
The Mugabe critic said hard working Zimbabweans had not suffered in vain.
“We, the people of Zimbabwe, are hard-working and focused. We may get disappointed by the system as we experience issues like corruption, economic mismanagement or police abuse of powers as they destroy lives and property using spikes.
“We may be denied clean water through poor planning, but all I know is that all the bad things in our lives have their own end date; nothing stays forever.”
Mukanya said the masses have the power to make or unmake leaders.
“All we just need is an organized government leadership that really cares for all the people. We must fight to cut the gap between the rich and the poor. Every citizen must enjoy Zimbabwe as a home.
“How does it feel for a millionaire to splash big money on champagne and imported wines and spirits as kids in the neighbourhood sleep hungry?
“We must love one another and do good stuff in the neighbourhood,” he said.
Advertisement