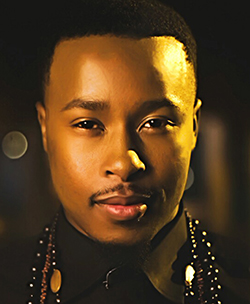 SINGER, songwriter and producer Njabulo Nkomo, better known as Tytan has been announced as the host for this year’s Miss World Zimbabwe UK beauty pageant taking place in London on the 1st of July.
The award-winning artist will co-host the pageant with businesswoman Olinda Chapel.  Tytan is also scheduled to perform and will serenade guests with tracks from his latest self-titled EP, Tytan.
Pageant Director Chiedza Ziyambe said that the team were over the moon by the recent development, adding that Tytan would appeal to the audience.
“Tytan is a vibrant, talented and charismatic young man and I am confident that he and Olinda will bring wit, charm, chemistry and undeniable presence to the pageant,” said Ziyambe.
In the last two years, Tytan has been making waves on the music scene with his Afro/urban contemporary songs and refreshing music videos that have shown the extent of his artistry and musicianship.
Tytan said he was honoured to have been approached to host the prestigious beauty pageant next month.
“I am humbled and truly looking forward to hosting Miss World Zim UK with the wonderful Olinda Chapel, and celebrating the remarkable work that this year’s finalists are doing and aspire to do,” said Tytan.
“It is inspiring to see young women who are passionate, intelligent, and who are working towards fulfilling their dreams – demonstrating what beauty with a purpose means to them.
I wish all the finalists the very best as they progress,” he added.
Olinda said: “I am honoured to be hosting Miss World Zimbabwe UK.
“Initiatives like this, that empower and give young girls the opportunity to discover their true purpose is amazing and, on the 1st of July we will celebrate the journey of these young girls and ultimately, witness the life-changing result of the winner.”
Riding on the success of his critically acclaimed single, Mukoko, featuring Ammara Brown, Tytan has gone on to release other singles that include I dondi Keya, Handirare and Bho, all of which have received rotational airtime on local radio stations.
To date, Mukoko has over 1.7million YouTube views and has even featured on music platforms like MTV Base Africa and Trace Africa.
Nkomo recently released his highly anticipated music video Ndipe Mwoyo. Directed and produced by BegottenSun, the video chronicles the story of a nurse who falls in love with her patient.Advertisement

Meanwhile, Musician Adrian Tate is also set to perform at the pageant.
The former Soul Afrika group member, who has carved a solo career for himself, recently released his EP alongside Tytan, and, has dubbed it as his comeback.
The pageant this year will be held at the prestigious De Vere Grand Connaught rooms. Situated on the Great Queen Street, it connects Covent Garden with Holborn in the West End of London.
The iconic venue has been home to many high-profile events dating back to 1775. It was once home to the original Freemasons’ Tavern before becoming a hotel in 1909.
Meanwhile, tickets for the Miss World Zimbabwe UK event are now on sale, with standard tickets available for £35. VIP tickets, which will guarantee guests front row seats, as well as a meal are available for £60 and can be purchased from the website at http://zimbabwefashionshowcase.com/miss-world-zim-uk/
The profiles of this year’s finalists are now live and can be viewed on the website. They highlight stories of their modelling careers, future aspirations and philanthropic work.
The winner, 1st and 2nd runners up, will be flown to Zimbabwe to compete for the Miss Zimbabwe 2017 title mid-July, with the overall winner being entered into the Miss World competition to be held in September.
The Miss World Zimbabwe UK campaign, which is running under the theme, Proud to be Zimbabwean, is a celebration of Zimbabwe, its culture and of women.