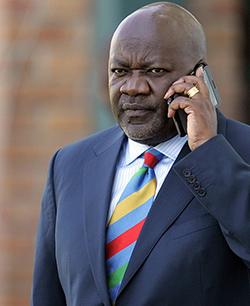 TAVENGWA Mukuhlani has been elected chairman of Zimbabwe Cricket after defeating interim chairman Wilson Manase on Thursday.
Mukuhlani’s election comes at a time when cricket in Zimbabwe, on the field and off it, is on the upswing and his challenge will be to retain the confidence of the ICC and sponsors.
Mukuhlani was vice-chairman of ZC when Peter Chingoka headed the board.
During his term, it appeared Manase had gained the confidence of the ICC after presenting to the world cricket ruling body what he labelled a revival strategy for the game in the country.
His diplomatic and negotiating skills were evident in the appointments of Alistair Campbell as managing director and Dav Whatmore as coach.
Manase seemed to have ended the frequent player strikes over payment issues and the recent eight-year rights deal with the Bangladesh company Total Sports Marketing would have sent a signal to sponsors that their money was in good hands.
Mukuhlani inherits all of this but his role could be a factor in how the immediate future pans out.
A medical practitioner by profession, he came on the ZC board in the early 2000s as the chairman of the then Mashonaland Cricket Association with a reputation for being moderate, sharp-minded and intellectual. He is also credited with making the new ZC constitution.
Mukuhlani will now need to invest confidence in coach Whatmore, who accepted the Zimbabwe job after the ICC sought a guarantee from ZC at that time that his obligations would be met.
Apart from maintaining sponsorship deals sealed under the outgoing board, Mukuhlani will also have to maintain such goals as rankings, completion of the Victoria Falls Test stadium project and retaining talent.Advertisement