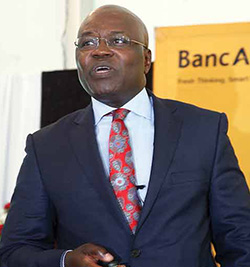 ABC Holdings founding chief executive officer Doug Munatsi and two other executives have stepped down from the financial group.
This follows the banking group’s takeover by an investment company co-owned by former Barclays Plc chief executive officer Bob Diamond and African entrepreneur Ashish Thakkar, pocketing at least $17 million in cash.
Another Zimbabwean, Ronald Pfende will replace Munatsi as the new boss. Munatsi has been in the banking sector for two decades.
Pfende joins ABC Holdings from Standard Bank Group where he was most recently head of finance and transformation.
Pfende also held a number of other senior posts at the bank, including that of CFO of Stanbic IBTC Bank in Nigeria and Stanbic Bank Uganda.
Prior to joining Standard Bank, he was financial controller of BP Tanzania. He is a qualified chartered accountant and has an MBA from the University of South Africa.
Atlas Mara completed its acquisition of BancABC in August 2014 after minorities agreed to a mandatory offer made by the new investors.
Group chief financial officer, Beki Moyo and chief operating officer Francis Dzanya also stood down with the group also agreeing for share options for the retiring top three executives.
“Mr. Munatsi, Mr. Moyo and Mr. Dzanya received a total of 1,743,888 Atlas Mara shares in consideration for the transfer of their shares in ABC Holdings at the time of the completion of the BancABC acquisition,” the group said.
“In connection with their separation, Atlas Mara has agreed to purchase these shares at a price of $10 per share. The repurchased shares will be held in treasury. In addition, the departing management team has been granted options over a total of 1,521,838 ordinary shares.
“The options have a strike price of $12 per share and are also subject to certain repurchase obligations. These options were previously agreed with the management team at the time of the initial acquisition of BancABC.”
Munatsi said the coming in of Atlas Mara would improve the bank’s access to international capital and boost its underwriting capacity.
In April Atlas Mara announced its plans to inject $100 million within the first 100 days of assuming a controlling stake in BancABC.Advertisement