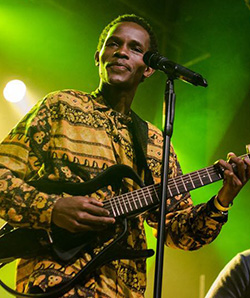 INTERNATIONAL touring artist, Munyaradzi Nyamarebvu, is set to launch his debut 11-track solo album, Ngatidanane, in Harare on February 10.
The Afro-folk singer-songwriter, who is also a cultural ambassador, has been involved in a series of collaborations as well as touring Europe and the USA since 2014.
He has finally decided to launch his long-awaited solo project. The album, an acoustic guitar offering which also features the mbira, is set to give audiences an up-close experience of Nyamarebvu’s natural voice.
Done in his native Shona language, the album has been brewing in the studios since 2012 and is expected to resonate well with both his international and Zimbabwean audiences.
“Uyu musambo unobata vomumusha kunyanya nokuti wakabva mumusha (this musical offering should impact my home audiences mostly because home is where l draw most of my musical inspiration),” says Nyamarebvu.
He added; “This solo concept is a specialty that hasn’t been experienced in the local music scene for quite some time.
“With this album, l am slowly orienting and subconsciously saying to the audiences, ‘welcome to my music, welcome to my brand’ in an intimate artistic fashion.”