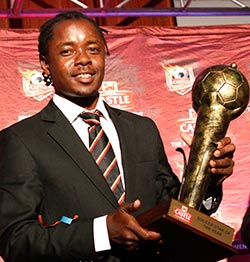 DYNAMOS midfielder Tawanda Muparati was on Friday night named Castle Lager Premier Soccer League Soccer Star of the Year capping a perfect season having also won the league title with the Harare side.
After former Dynamos attacker Denver Mukamba won the prize last year, Muparati ensured the glittering silverware remained in the DeMbare family after seeing off competition from Harare City’s Silas Songani and Chicken Inn’s Kuda Mahachi, first and second runner-up.
Muparati — who has been one of the most consistent players in the league in recent seasons, but unlucky not to make it into the 11 finalists — finally got his reward at a colourful Soccer Stars Banquet held in Harare on Friday night.
He walked away with a $5,000 cheque.
But it was Harare City who frequented the winners’ podium more than any other club with mentor Bigboy Mawiwi winning the Coach of the Year award. Songani got $3 000 while Mawiwi received $2 000.
City also got the Most Disciplined Team of the Year award which has a $10,000 reward, to take the club’s prize tally to $15,000.
Twenty-one-year-old Mahachi edged closer to the top prize this term having been named Rookie of the Year last year. He is the only survivor from last year’s 11 finalists.
Mahachi’s former teammate Tendai Ndoro, who has since joined South Africa’s Black Aces, scored 18 goals in his second season with the Bulawayo-based club to win the Golden Boot Award. He received $3 000 for his efforts.
Black Rhinos goalkeeper Herbert Rusawo was the surprise winner for the Goalkeeper of the Year award.
Dynamos stopper George Chigova appeared the favourite to land the title considering his club conceded the least number of goals this season.
But the big goalkeeper lost out after the organisers applied their own formula to come up with the winner.

Caps United and national under-20 captain Ronald Pfumbidzai was named the Rookie of the Year.
The 19-year-old joined the Green Machine at the start of the season and immediately made the left-back position his.
Harare-based referee Nomore Musundire was voted the best in the land, in a season when most referees hogged the limelight for the wrong reasons.Advertisement

Tiwone Kacheche was voted the first runner-up while Thomas Kusosa was adjudged this year’s third best referee. Kusosa was the first runner-up last year.
Football writers, coaches and the Footballers’ Union of Zimbabwe made up the voting panel which met on November 23 to come up with the best performers of the season.
While the votes for the 11 finalists were counted and announced immediately, those for the top three and for the Coach of the Year were sealed in an envelope and only counted ahead of the banquet.
The 11 finalists: George Chigova, Tawanda Muparati, Gift Bello (all Dynamos), Silas Songani (Harare City), Charles Sibanda (FC Platinum), Eric Chipeta (Hwange), Kuda Mahachi, Tendai Ndoro (both Chicken Inn), Menard Mupera (How Mine), Hardlife Zvirekwi (Caps United), Munyaradzi Diya (Highlanders).