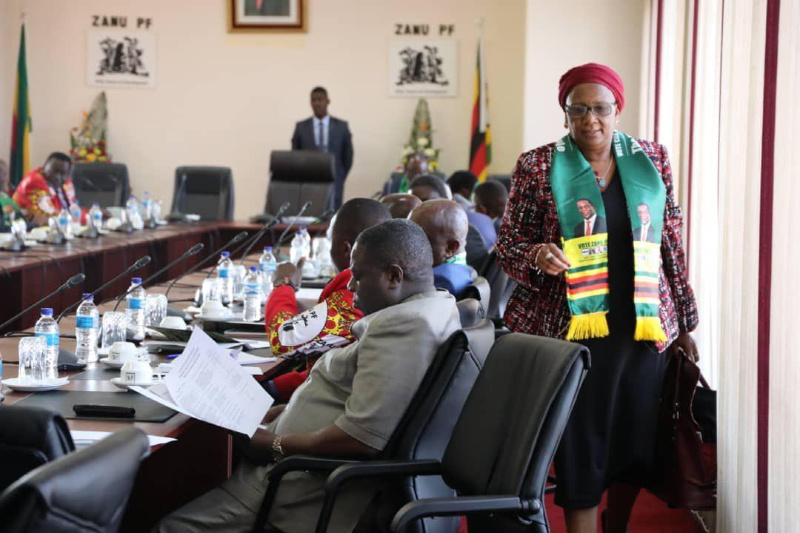 Mupfumira cut a lonely and dejected figure among the delegates before, during and after the routine meeting of the PCC.

This was her first appearance at a Zanu PF meeting in as many months since her arrest and detention in remand prison for allegedly creaming-off US$90 million from the state pension fund administrator, National Social Security Authority (NSSA).

Unlike during her time as an influential and wealthy political figure who would often be mobbed during similar gatherings, Mupfumira was a conspicuous island as fellow members visibly tried to avoid touching her.

To avoid eye-contact with her colleagues, the Zanu PF Senator kept glued to her mobile phone.

Efforts by NewZimbabwe.com to get comment from Mupfumira were fruitless as immediately after the event ended, she, in unusual fashion, darted to her car and drove off.

The former minister was demoted from the powerful Zanu PF Politburo, the party’s highest decision-making body outside congress. She, however, remains in the party’s central committee.

In 2019, Mupfumira became the first senior government official to be probed by the Zimbabwe Anti-Corruption Commission (ZAAC) for charges ranging from abuse of state pension funds, financing her political campaigns to directing investments of up to $62 million into a bank against the advice of NSSA’s risk committee.

She is also accused of illegally entering property deals worth $15,7 million.

The allegations stem from Mupfumira’s tenure as labour minister between 2014 and 2018.

Mupfumira’s corruption and abuse of office case is still pending before the courts.

Her trial commenced after numerous false starts as the ex-minister’s lawyer argued she was suffering from a mental illness and was unfit to stand trial.