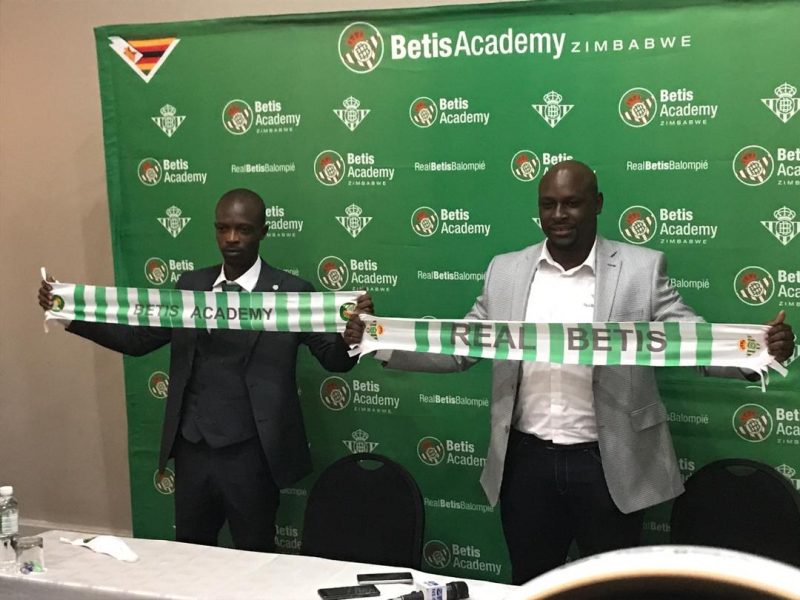 SPANISH La Liga club Real Betis has hailed the appointment of former Dynamos captain Murape Murape as the head coach of the newly established Real Betis Academy Zimbabwe as a major step in the establishment of the football development project.

As exclusively revealed by NewZimbabwe.com last month Murape was officially unveiled as the local head coach at a press briefing held at a local hotel on Thursday.

The 40-year-old former Dynamos captain and assistant coach will lead a select group of local coaches which will work under a technical director who will be appointed by the Spanish club.

Speaking from his base in Spain, Álvaro Suárez, who is the International Business Development Manager of Real Betis said they were delighted with Murape’s appointment.

“We are very happy with the appointment of the new head coach, the technical director here is ready to start working with him and communicating our club’s methodology to the Zimbabwe local coaches and start developing the Real Betis style (of football) over there,” Suárez said.

“We are also happy to know that there is progress with our academy and we are looking forward to starting moving and the coach will hopefully start putting in place his players from October.

“As Real Betis we are looking forward to establishing our values and methodology   as a club in Zimbabwe and becoming one of the most admired European clubs in the region, we really hope to have a long-lasting relationship with the Zimbabwean community.”

Murape became one of the club’s longest-serving sons and rose to captain the Glamour Boys and also guided the club as an assistant coach under head coaches Lloyd Mutasa and Lloyd Chigove.

After his departure from DeMbare, Murape has recently been working as head coach of the soccer programme at Borrowdale Brooke-based The Heritage School.

The Real Betis Academy Zimbabwe is expected to begin operations in Harare from next month although that would depend on the lifting of current restrictions on football activities due to the coronavirus pandemic.

Other appointments will be announced soon and a number of retired local footballers will be engaged for mentorship programmes for the youngsters.

The project is in partnership with local sports agency Athletes Sphere Management (ASM which is headed by former Zimbabwe rugby international Gerald Sibanda.

As a starting point, two schools which are yet to be confirmed will be used as centres for the academy in Harare and Bulawayo, while Midlands, Manicaland and Victoria Falls will chip in with one each.

A group of at least 15 players from the academy will travel to Seville, Spain every for a series of activities meant to prepare them for the rigours of top-level professional football.

During the tour at Real Betis, the players will have an opportunity to train with the Spanish club’s academy teams and play friendly matches with local youth and schools’ teams in Seville and Real Betis age group sides.

Other activities will include attending nutritional classes –as well as a tour of the club’s training facilities and the Benito Villamarín Stadium.