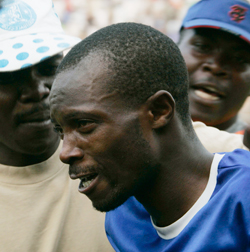 DYNAMOS captain Murape Murape insists Dynamos can score the four goals they need to stay in the Champions League when they host Tunisian champions CA Birzetin at Rufaro on Sunday.
The Tunisians, who arrived on Friday evening, lead 3-0 from the first leg of their first round match.
Murape, a veteran of past heroic battles for the champions, admits an away goal for the Tunisians could kill any hopes of a comeback even as he promised a Dynamos fightback.
“It will be a difficult game. We play for the biggest club in the country and we know what is expected of us,” Murape said on Friday.
“We know we can get the four goals that we want on Sunday, but we just want the fans to back us and support us all the way even if things are not going as well.”
Coach Callisto Pasuwa will only make a decision on the final 11 on Saturday as key players Francesco Zekumbawira and Stephen Alimenda are struggling with injuries.
“Zekumbawira did not train today and Alimenda will have to pass a late fitness test to make it for Sunday’s game,” said Pasuwa at his pre-match press conference on Friday.
Farai Mupasiri and Ugandan international Boban Ziruntusa are the only other strikers of note in the Dynamos line-up, but the coach needs more firepower.
Pasuwa watched his men weather the Birzetin offensive in the opening 45 minutes of the first leg only to collapse after the break with three goals that all came from set-pieces.
“We have been looking at our shortcomings so that we get the much needed result,” Pasuwa said. “We did well in the first half and collapsed in the second.”
In the last three outings against North African opposition, Dynamos have always come second best. In 2011, they beat MC Alger of Algeria 4-1 at Rufaro, but crumbled 3-0 away to bow out.
Last season, they drew 1-1 with eventual African champions Esperance of Tunisia but were humiliated 6-0 in the return leg.
A wake up call should have been evident for Dynamos in the preliminary round when they lost 1-0 to Lesotho Correctional Services in Maseru.
Two draws in the opening Premier Soccer League calendar against Black Mambas and Chicken Inn have not been helpful either.

In Pasuwa’s defence, he might be able to say: “Statistics [in sport] are like bikinis – they show a lot but not everything.”