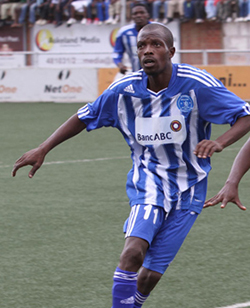 DYNAMOS captain Murape Murape has rallied his troops urging them to up their game as they face off closest challengers ZPC Kariba at the National Sports Stadium on Saturday in a contest that will decide the destiny of the championship this season.
The champions are on top of the league table with 54 points with two games left before the end of the campaign with ZPC Kariba in second place with 53 points.
Saul Chaminuka’s men had leapt to the summit of the table on Saturday following a 3-2 victory before Dynamos reclaimed top spot 24 hours later following a point gained in the 0-0 draw against Bantu.
Murape said they have to up their game on Saturday if they are to claim the trophy. This followed two draws at home against Chapungu and Bantu.
“We need to raise our game if we are to be champions,” he said.
“It’s the right time to show character. It’s the character that is going to make the difference in this race. We need to summon all the experience and ensure we win. That will make us champions.
“We should lay to rest our performance in the two drawn games against Chapungu and Bantu.”
Although they have dropped points following two successive draws against Chapungu and Bantu, the champions take comfort from the fact that they are unbeaten in their last 17 matches.
A win against ZPC Kariba will seem them laying their hands on the coveted title for the fourth successive season.
A draw against ZPC Kariba will still not be a bad result as they will need to beat How Mine on the last day of the league programme to claim the championship.
This is regardless of ZPC Kariba also winning their last match against Caps United.
Caps United who face Harare City on Saturday have also added an interesting twist to the title race as they still have mathematical chances of being crowned champions.
FIXTURES
Saturday: Dynamos v ZPC Kariba, Chicken Inn v Buffaloes
Sunday: Chapungu United v Black Rhinos, Chiredzi v Triangle, Hwange v FC Platinum, Shabanie Mine v Highlanders, Caps United v Harare City, Bantu Rovers v How Mine