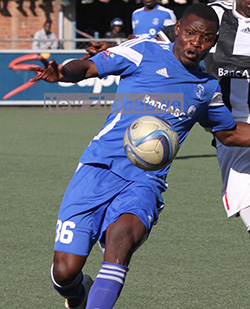 AFTER recovering from a knee injury, Dynamos defender Elisha Muroiwa is relishing the chance of playing at Afcon finals next month.
Muroiwa took part in the qualifiers as coach Callisto Pasuwa’s men booked a place for Gabon 2017 with a match to spare.
But Muroiwa missed the trip to Guinea for the final qualifying match due to injury.
Last Sunday he played the whole match as Dynamos, beat Highlanders in a challenge match, to commemorate the latter’s 90th anniversary.
“Of course when you are injured you end up missing playing. That is what happened to me but, I am happy I am back to full fitness now,” Muroiwa said.
“Just like any other footballer I would love to play at Afcon. It is a stage where every footballer in Africa, dreams of playing on. But it is up to the coaches to select me and I hope to be given that chance. I would be happy.”
Muroiwa’s biggest rival for the center back position, in the Warriors set-up is Chicken Inn defender Lawrence Mhlanga but, both of them could make it into Pasuwa’s squad.Advertisement