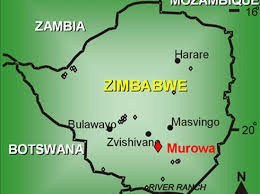 ZVISHAVANE based Murowa Diamonds has invested over $6m in the purchase of new mining equipment as part of its expansion programme.
The equipment comprises excavators, dump trucks, dozers and graders and, according to Murowa board chairperson Lovemore Chihota, will help “increase waste stripping and the amount of ore exposed for processing in the future.”
Chihota said the investment would go a long way in sustaining operations at the mine.
“As part of our long term investment plan, this acquisition of the latest equipment will go a long way in ensuring that we are able to continue mining sustainably,” Chihota said at the unveiling of the equipment at the mining site on Tuesday.
He said since taking over from Canada based Rio Tinto in July last year, RioZim has invested $60m as part of the company’s expansion programme.
The investment was a demonstration of the new shareholders’ long term commitment to inject funds in the growth of the mining sector in the country.
“The investment in the new mining equipment comes against a background of falling market prices for diamonds and shows the shareholders’ confidence in the company, the diamond industry and the country,” he said.
Over 200 jobs will be created by the new investment as the mine seeks to bring economic benefits to the surrounding communities.Advertisement