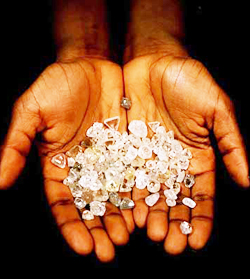 DIAMOND production at Rio Tinto’s Murowa mine fell 12 percent year-on-year in the first quarter to 89,000 carats due to poor weather and lower ore grades, the company said on Tuesday.
“First quarter carats recovered at Murowa were lower than the same period in 2013 due to lower grades, slightly lower ore processed and the impact of wet weather on mining operations, which were partially offset by processing previously stockpiled material,” RioTinto said in a quarterly trading update.
The company achieved 101,000 carats in the first quarter of 2013.
On a quarterly basis, production dropped by 34 percent compared to the 135,000 carats achieved in the fourth quarter.
The mine, located near Zvishavane, is 78 percent owned by Rio Tinto with a local company, RioZim holding the remaining 22 percent equity.Advertisement