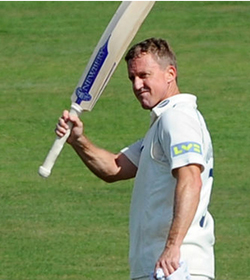 FORMER Zimbabwe batsmen Murray Goodwin has announced his retirement for Glamorgan which will end his 20-year long cricketing career.
Goodwin last played for Zimbabawe in 2000 but has been active in county cricket for more than a decade.
According to a report in bbcsport.com, Goodwin’s team-mate from Glamorgan, Gareth Rees is also purusing his retirement at the end of the season.
Last month, Goodwin revealed that he might be forced to leave Glamorgan due to financial reasons.
Other players who would be leaving Glamorgan CC include Mike Reed, John Glower, Huw Waters, Stewart Walters and Tom Lancefield.
Glamorgan chief executive Hugh Morris bid farewell to all the players.
“On behalf of everyone at Glamorgan CC, we thank them for their contribution to the club and wish them and their families well for the future.”Advertisement