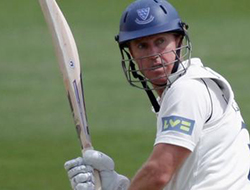 FORMER Sussex batsman Murrya Goodwin has been appointed as the club’s new batting coach for 2016.
The 43-year-old ex-Zimbabwe international, who retired in 2014 after a spell with Glamorgan, needs no introduction to Sussex supporters, having spent 12 seasons with the county as a player.
Goodwin saw off competition from a strong group of candidates which included his former captain Chris Adams to be handed the new role.
He was a key part of the Sussex team that won the County Championship in 2003, 2006 and 2007, the C&G Trophy in 2006, and the Pro40 in 2008 and 2009, along with the Twenty20 Cup – also in 2009 – to complete a full sweep.
He scored over 24,000 runs for Sussex in all formats, including nearly 14,500 first-class runs with 48 hundreds and an average approaching 50.
He made two triple-centuries, as well as scoring the runs which won the county’s first Championship in 2003, and hit a six off the final ball of the match to secure the 2008 Pro40.
Goodwin, who was confirmed as a vice-president of Sussex Cricket in early 2015, said of his new appointment: “I believe I can bring to a very talented squad some belief and options on playing certain situations in all forms of the game. I’m hoping to try and add a winning culture to this talented squad.
“I am grateful for the opportunity to come back to my second home. When I applied for the role I was always hopeful but to actually have been considered above the many applicants who applied is very humbling. I’m looking forward to seeing a lot of friends at this great club.”
Sussex head coach Mark Davis said: “I am thrilled to have Murray Goodwin joining us.
“His vast batting experience, gained from many years of first-class and international cricket all over the world, will be invaluable to Sussex Cricket.
“I am confident Murray’s relentless approach to batting and his technical expertise will be of great value throughout the Sussex Cricket pathway.
“He has a brilliant work ethic and a passion for teaching the game, which is a vital ingredient in any elite coach.
“I am sure he will be welcomed back by everyone at Sussex Cricket and I look forward to him becoming an integral part of our coaching team.”
Goodwin was released by Sussex at the end of the 2012 season and spent the next two years playing for Glamorgan before announcing his retirement in October 2014.Advertisement

He currently lives in Australia but is due to return to Hove at the end of the month in time for the opening Championship game against Northamptonshire on April 10.