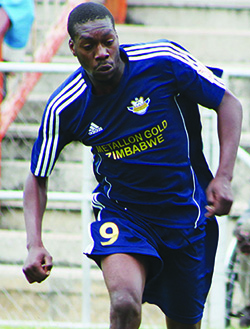 ZIMBABWE international Kudakwashe Musharu is awaiting feedback from Absa Premiership side Mpumalanga Black Aces after spending a week on trial with the club last month.
According to Musharu’s club, How Mine, the striker impressed the Aces technical team during, and he’s now back in his home country.
“Musharu is back and trained with us for the whole of last week,” Mine chairman Mlondolozi Nkomo told the Southern Eye.
“The only correspondence that we got from Mpumalanga [Black Aces] is that they were impressed with the player and that was it. He is yet to get feedback from the club,” the Mlondolozi concluded.
Musharu found the back of the net on 12 occasions in the league for Mine last season, sharing the Castle Premiership Golden Boot award with Charles Sibanda, who had the same number of goals
AmaZayoni have exceed their foreign quota as they currently have five foreigners registered with the Premier Soccer League (PSL) this season.
Ghana duo Kwabena Adusei, Edwin Gyimah, former Nigeria international Onyekachi Okonkwo, Zambian striker Collins Mbesuma as well as Musharu’s countryman Tendai Ndoro are all registered as foreigners.Advertisement